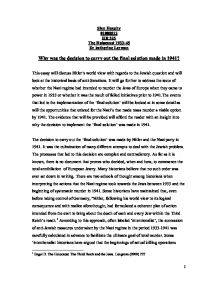 Why was the decision to carry out the final solution made in 1941?

Sian Heaphy 01008812 HR 325 The Holocaust 1933-45 Dr katherine Lerman Why was the decision to carry out the final solution made in 1941? This essay will discuss Hitler's world view with regards to the Jewish question and will look at the historical basis of anti-Semitism. It will go further to address the issue of whether the Nazi regime had intended to murder the Jews of Europe when they came to power in 1933 or whether it was the result of failed initiatives prior to 1941.The events that led to the implementation of the 'final solution' will be looked at in some detail as will the opportunities that existed for the Nazi's that made mass murder a viable option by 1941. The evidence that will be provided will afford the reader with an insight into why the decision to implement the 'final solution' was made in 1941. The decision to carry out the 'final solution' was made by Hitler and the Nazi party in 1941. It was the culmination of many different attempts to deal with the Jewish problem. The processes that led to this decision are complex and contradictory. As far as it is known, there is no document that proves who decided, when and how, to commence the total annihilation of European Jewry. Many historians believe that no such order was ever set down in writing. There are two schools of thought among historians when interpreting the actions that the Nazi regime took towards the Jews between 1933 and the beginning of systematic murder in 1941. ...read more.

Christopher Browning suggests that the German expectation in 1939-40 seems to have been that the Jews would suffer a great "decimation" in the ghettos, but in reality what did occur was the death of nearly one-fifth of polish Jewry from starvation and disease. By 1941, through the necessity of war time conditions, Germany had access to the kind of technology, man power and other resources that had previously been unavailable to them. This was critical in the decision to implement the 'final solution' in 1941. The Nazi's relied heavily upon technology, the use of gas, railways, and the movement of vast numbers of people would have been more difficult if it had not been for the development of key industries and technological advancement. Death camps were set up with the sole purpose of mass murder and were operational in 1941. Unlike concentration camps, death camps had no barracks to house prisoners, other then those for workers at the camps. The Nazi's gassed their Jewish prisoners in camps such as Treblinka, Chelmno, Sobibor and Belzec. There were two that had work camps attached, Auschwitz and Maidenek. At Auschwitz, gas chambers help 2,000 people at a time. With the introduction of a cyanide based gas called Zyklon B, all 2,000 occupants could be killed in five minutes. As a result of this 'technological advancement', Auschwitz was able to 'process' the death of 12,000 people daily. Many of the people who were enlisted to work at these death camps had previously been involved in Euthanasia programmes established to deal with mental patients. ...read more.

It is clear that different approaches had been explored prior to the decision to carry out the 'final solution' was made in 1941, from the ghettos established in Poland to the policies on forced emigration. As this essay has discussed, many historians believe that Hitler had murderous intentions right from the start in 1933, this however does not explain why the 'final solution' came about in 1941. One must consider contingency plans and the role of opportunity. Therefore this paper concludes that the decision to carry out the 'final solution' was made in 1941 because of a number of factors. All evidence suggests that the Nazi party between the years of 1933 -1941 had tried many different solutions to the 'Jewish problem', and these had either collapsed close to the start or proved to be inefficient, too slow, too time consuming and perhaps even too chaotic, (this was especially true in the east). Therefore contingency plans were being devised by competing agencies within the Nazi party. Technological advancement is also highly relevant to this discussion as by 1941 the Nazi party had access to the kinds of equipment and skills necessary to annihilate the Jews. World War Two provided the Nazi's with the opportunity they needed to carry out their murderous intentions, by giving them access to many more Jews, thus opening up the 'Jewish question'. The war also encouraged a climate in Europe whereby killing became somehow more acceptable. Moreover, with the war exploding all over Europe, Hitler found that he could carry out his genocidal ambitions without the scrutiny of the rest of the world. ...read more.