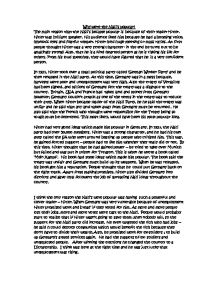 Why were the Nazis popular?

Why were the Nazi's popular? The main reason that the Nazi's became popular is because of their leader Hitler. Hitler was brilliant speaker. His audience liked him because he had a booming voice, hypnotic eyes and fearful temper. Hitler held huge meeting or mass rallies. At first people thought Hitler was a very strong character- in the end he turns out to be amazingly strong! Also, that he is a kind-hearted person as he is risking his life for others. From his loud speeches, they would have figured that he is a very confident person. In 1921, Hitler took over a small political party called 'German Worker Party' and he then renamed it the Nazi party. ...read more.

He also said that the French who thought were responsible for the Treaty being so tough must be destroyed. This most likely, would have been his most popular idea. Hitler had very good ideas which made him popular in Germany. In 1923, the Nazi party had over 50,000 members. Hitler was a strong character, and he had his own army called the SA who went around beating up people who critised him. This way, he gained forced support - people had to like him whether they really did or not. By this time, Hitler thought that he had gained power - he tried to take over Munich but failed and was put in prison for Treason. ...read more.

When Germany was very vulnerable because of unemployment Hitler promised work and bread' if they voted for him. As more and more people lost their jobs, more and more votes were cast to the Nazi. People would probably start to realise that if Hitler wasn't going to save them ,then nobody will, so the support for the Nazi party did increase. He even targeted the rich who had jobs - he said h could destroy communism which would benefit the rich because they don't have to divide their wealth.Also, he promised work for ex-soliders ; to build up Germany's armed services again. He had the suppots of ex- soldiers and unemployed people. After winning the elections he changed the country to a Dictatorship. I think was here at the right time and he was just lucky that unemployment was rising. ...read more.