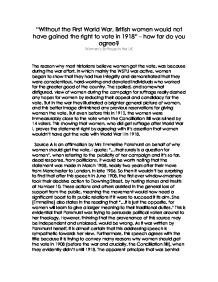 &quot;Without the First World War, British women would not have gained the right to vote in 1918&quot; - how far do you agree?

"Without the First World War, British women would not have gained the right to vote in 1918" - how far do you agree? Women's Suffrage in the UK The reason why most historians believe women got the vote, was because during the war effort, in which mainly the WSPU was active, women began to show that they had true integrity and demonstrated that they were conscientious, hard-working and devoted individuals who worked for the greater good of the country. The spoiled, and somewhat disfigured, view of women during the campaign for suffrage really dashed any hopes for women by reducing their appeal and candidacy for the vote. But in the war they illustrated a brighter general picture of women, and this better image diminished any previous reservations for giving women the vote. But even before this in 1912, the women were immeasurably close to the vote when the Concilliation Bill was ruined by 14 voters. This showing that women, who did get suffrage after World War I, proves the statement right by agreeing with it's assertion that women wouldn't have got the vote with World War I in 1918. Source A is an affirmation by Mrs Emmeline Pankhurst on behalf of why women should get the vote, I quote: "...that surely is a question for women", when referring to the publicity of her campaign and it's so far, dead response, from politicians. ...read more.

Of course it had other points which it tried to get across, namely one directed at the government alerting them to the actions of men and their rights and the actions of women and their consequences. It therefore agrees with the fact that without the existence of World War I, women would not have gained the vote in 1918, well, at least for over 30's and householders etc. In 1912, Lord Curzon (the then leader of the opposition and Conservative Party), stated in speech [Source C] that there were multiple issues involved with giving women the vote. It [the speech] indiscriminately generalised women who were seen to be "an effect on the government" (when referring to its current efficiency) and were seen to have "insufficient knowledge" to vote. This, as stated, was in 1912 and so was made after events such as: the first hungers strikes by prisoners, namely Marion Wallace Dunlop; the introduction of Force feeding; the failing of the campaigners impression on Asquith's vote plans; and Black Friday, where over 300 women suffragettes campaigned outside Parliament in the midst of news that the Concilliation Bill had failed. So this may have had some influence of his speech. ...read more.

Male employees were seen to be quite brutal in their opinions and their actions upon them - for example - women's lockers were frequently damaged and burnt, with the valuables inside. Unfortunately, in addition to low wages and male hostility, women lacked time (and often energy) because of the demands of domestic responsibilities, which still plagued women in the early 20th century. The source, IMO, doesn't seem to be anyway biased, opinionated, and to me shows a strong provenance. This is due mainly to the date stamp of the work - Rex Pope, 1991 -, which demonstrates to me that after 73 after the end of the First World War, that Rex Pope has most probably got a wide-range of facts and evaluated the different opinions and grasped a better, independent, knowledge on what happened between 1914 - 1918. There is no single purpose to the source, as it was produced in the late 20th century and so many people that would have been influential enough to read or even take action on what was wrote, may have already died. Rex Pope seems to have seized many sources at his disposal and created a sovereign view on what occurred, for purposes of people wanting to learn about the suffrage campaign and its concepts. ?? ?? ?? ?? ...read more.