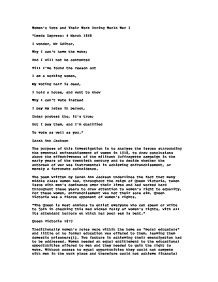 Women's Vote and Their Work During World War I

Women's Vote and Their Work During World War I "Leeds Express: 4 March 1868 I wonder, Mr Editor, Why I can't have the vote; And I will not be contented Till I've found the reason out I am a working woman, My voting half is dead, I hold a house, and want to know Why I can't vote instead I pay my rates in person, Under protest tho, it's true; But I pay them, and I'm qualified To vote as well as you." Sarah Ann Jackson The purpose of this investigation is to analyse the issues surrounding the eventual enfranchisement of women in 1918, to draw conclusions about the effectiveness of the militant Suffragette campaign in the early years of the twentieth century and to decide whether the outbreak of war was instrumental in achieving enfranchisement, or merely a fortunate coincidence. The poem written by Sarah Ann Jackson underlines the fact that many middle class women had, throughout the reign of Queen Victoria, taken issue with men's dominance over their lives and had worked hard throughout these years to draw attention to women's right to equality. For these women, enfranchisement was not their sole aim. Queen Victoria was a fierce opponent of women's rights. "The Queen is most anxious to enlist everyone who can speak or write to join in checking this mad wicked folly of women's rights, with all its attendant horrors on which her poor sex is bent." Queen Victoria 1870 Traditionally women's roles were within the home as "moral educators" and little or no formal education was offered to them, leaving them domestic prisoners[1]. Two factors in achieving their emancipation had to be addressed. Women needed an equal entitlement to the educational opportunities offered to men and they needed to gain the right to vote. Without access to equal opportunities they could not compete with men in the work place and therefore could not achieve financial independence.[2] In order to change these policies women needed the right to vote. ...read more.

This is reinforced by the fact that women on the Isle of Man were enfranchised in 1881! The election of Sir Henry Campbell-Bannerman as Prime Minister in 1905 proved to be the trigger that released the pent up frustration of the militant feminists, marking the beginning of the period of violence and civil disturbance for which the movement is best known. He resigned in 1906 and H H Asquith became Prime Minister. He had initially been sympathetic to the women's cause but the continuing campaign of violence made it difficult for him to continue to be supportive. Christabel Pankhurst set up an arson campaign in 1911, which led to mail boxes set alight, bombs sent through windows, attempted arson on the Home Secretary: David Lloyd George's newly built house, and many other actions.[21] The Suffragettes, during the seven months running up to July 1914 participated in arson on eleven works of art in the National Gallery. An insurance company estimated that the Suffragettes caused £250,000 worth of damage in the first seven months of 1914. [22] This alienated a huge section of the population. It has to be remembered that, whilst many men and women supported the cause for enfranchisement, there were far more who were opposed to it. Angered by the actions of the Suffragettes, these people helped to return the Liberals to power, albeit with a reduced majority. From this it could be argued that, had there been less violence, the outcome of the 1910 election might have been different. The following four years saw continuing acts of arson and bombing, jailing and force-feeding which ended only with the outbreak of was in 1914. In 1912 the Labour Party declared itself to be in support of the women's enfranchisement and the NUWSS/Labour alliance was formed. Women were hopeful that the 1912 Reform Bill with its inclusion of women would be successful. "The passing of the Reform Bill with the inclusion of women will be the outward and visible sign of a profound ...read more.