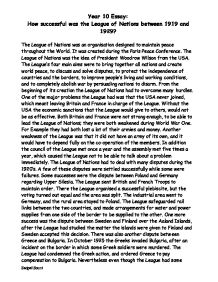 Poland had taken over Vilna with military force. When Lithuania appealed to the League for help the League protested to Poland, but it was ignored and ditched. Even though the League could have sent British and French forces to force the Poles out of Vilna, it chose not to and Poland eventually kept Vilna. Also another failure was the Geneva Protocol, the Turks were so outraged by the Treaty of Sevres that they refused to accept it. They went on fighting mainly against the Greeks, until the allies were ready to agree to the Treaty of Lausanne in 1923. The Corfu incident was one of the most important failures of the League of Nations. The Corfu Incident was between Italy and Greece. In 1923, Mussolini invaded Corfu because an Italian General Tellini was ambushed and murdered on the Greek side while surveying the frontier between Greece and Albania for the Conference of Ambassadors. The League made Greece pay compensation for the murder of the Italian general. This money was to be held by the League and then paid to Italy if and when Tellini's killers were found. ...read more.

However the League of Nations had largely failed in bringing about disarmament, even though several attempts were made in the 1920's to try and ensure peace throughout the world. For example the Washington Treaty (outside of the League of Nations) signed by the USA, Britain and France, Japan and Italy to limit the size of their navies and not to build anymore battleships for ten years. Nevertheless, there were proposals for a disarmament treaty, but they were rejected by Britain, and the problems for bringing about disarmament did not seem to matter due to the Locarno and Kellogg-Briand Pacts. In the Locarno Pact the Germans accepted all of their western borders, and that the Rhineland would remain a demilitarised zone. In The Kellogg-Briand Pact, 64 nations (including Germany) agreed not to go to war. However there was a flaw in this pact because nothing was mentioned if one of the countries went to war what would happen to them. Therefore, in conclusion it can be said that the League of Nations had been successful to a certain extent. The League had many successes through its commissions, but some of its main goals were not achieved which was not surprising as they were way too ambitious.! ?? ?? ?? ?? Sadpal Souni ...read more.