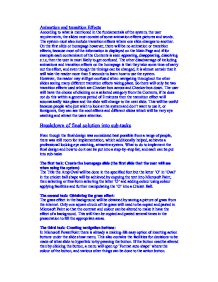 Animation and transition Effects According to what is mentioned in the fundamentals of the system, the user requirements, the slides must consist of some animation effects pictures and words. The system must also include transition effects where one slide changes to another. On the first slide or homepage however, there will be no animation or transition effects, because most of the information is displayed on the Main Page and if for example each contaminant of the Contents is seen appearing, disappearing, dissolving e.t.c, then the user is most likely to get confused. The other disadvantage of including animations and transition effects on the homepage is that they take some time of carry out the effect, and even though the timings can be changed, it is almost certain that it will take the reader more than 5 seconds to learn how to use the system. However, the reader may still get confused when navigating throughout the other slides seeing many different transition effects taking place. ...read more.

The Title the Amp Oval will be done in the specified font but the letter 'O' in 'Oval' in the cricket ball shape will be achieved by copying the text into Microsoft Paint, then selecting or free-form selecting the letter 'O' and adding colour using colour applying facilities and further manipulating the 'O' into a Cricket Ball. The second task: Obtaining the grass effect: The grass effect in the background will be obtained by saving a picture of grass from the internet. Only one square chunk of the grass will need to be copied and pasted in Microsoft Paint so that the contrast and colour can be altered to make it have the effect of a background. This will then be copied and pasted several times in the presentation to fill the appropriate areas. The third task: Creating navigation buttons: In Microsoft PowerPoint there is already a making-life easy option of inserting action buttons under the slide show menu. ...read more.

The fifth task: Adding animation and transitional effects to each slide: Each slide will contain similar animation and transition effects to add more interest and get the users attention. The final task: Testing to see if the system works: Ultimately the most important task is to check if the system works, if it doesn't work as required then the errors can be corrected. If this final task is not carried out, then there is no idea if the system will meet the User requirements. Test Plan It can not be emphasized enough how important it is to carry out a test plan to confirm and re-confirm that the design contains everything mentioned in the user requirements, any additional, and implementations are to be considered after the design has been implemented. It is very important to know that no errors are to be discovered in the system. Therefore, a test plan has been assembled together and thought of with great precision to make sure that the system is to the highest of standards. ...read more.