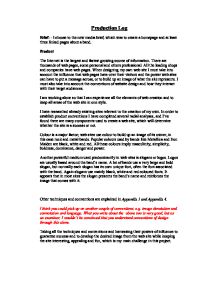 Create a homepage and at least three linked pages about a band.

Production Log Brief: - I choose to the new media brief, which was to create a homepage and at least three linked pages about a band. Product The Internet is the largest and fastest growing source of information. There are thousands of web pages, some personal and others professional. All the leading shops and companies have web pages. When designing my own web site I must take into account the influence that web pages have over their visitors and the power web sites can have to put a message across, or to build up an image of what the site represents. I must also take into account the conventions of website design and how they interact with their target audiences. I am working alone so that I can experience all the elements of web creation and to keep all areas of the web site in one style. I have researched already existing sites relevant to the creation of my own. In order to establish product conventions I have completed several radial analyses, and I've found there are many components used to create a web site, which will determine whether the site is a success or not. Colour is a major factor; web sites use colour to build up an image of its owner, in this case rock and metal bands. ...read more.

Then a colour scheme had to be decided before I could even consider other aspects of the site. This was done by using my radial analyses to see which the most popular colour schemes were and how effective their use was Appendix4. I then decided that the best way to plan the rest of the site was to see how my target audience thought the site should look like and what it includes. I created a questionnaire with questions designed to simply find out what people expect from a website. These can be seen in Appendix 6. Using the questionnaires I went about planning different ways to implement different parts of the web site to fit in with my target audience's own views about web design. Animations, banners and interaction proved to be the popular choices for many people. So I planned to make animations from photos of the band as pictures capture more than words. I then made a plain but bold banner to feature on most pages. The only way I could find to make the site interactive with the equipment available to me was to create a guest book and message forum. Somewhere in the above you need to add how you write drafts of the articles etc and then developed them and what pictures you took of the band (you will need to pretend that you took some of the pictures at least). ...read more.

Line of Vision: 1 Slogan (banner) 2 Page Title 3 Navigation Bar 4 Text 5 Pictures Why did you want it to go in this order and how did you make sure that it did? You could explain the name- you don't mention it anywhere in the report except for the last sentence. You need some comparison between your site and a real, named one from the net. A couple of paragraphs will be fine, explaining what they have in common, but also acknowledging and explaining if possible, any differences. Try to use media terms, e.g. connotation, camera angle/distance, motive etc. I believe that I have created a web site that will be a success. I have incorporated appropriate product conventions like colour scheme into my site but set new and original ones in other areas such as typeface to add originality to the site and to avoid being overlooked as a copy or standard site. The visitors have to want to return to the site and take more of an interest in the band for it to prove useful for Soap Dish; I hope by making the site original and different I will do just that. End with a coupe of lines on what you've enjoyed/learned during the project. Gary- you're a little star- I have hardly changed any of it, and what you have to do hopefully won't take too long (must be in on Tuesday...) Well done :) ...read more.