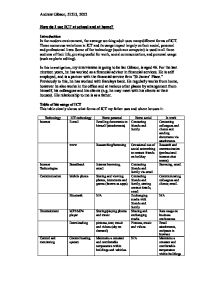 How do I use ICT at school and at home?

How do I use ICT at school and at home? Introduction In the modern environment, the average working adult uses many different forms of ICT. These numerous variations in ICT and its usage impact largely on their social, personal and professional lives. Some of the technology (such as a computer) is used in all three sections of their life, proving useful for work, social communication, and personal usage (such as photo editing). In this investigation, my interviewee is going to be Ian Gibson, is aged 46. For the last nineteen years, he has worked as a financial advisor in financial services. He is self employed, and is a partner with the financial service firm "St James' Place." Previously to this, he has worked with Barclays bank. He regularly works from home, however he also works in the office and at various other places by arrangement from himself, his colleagues and his clients (e.g. he may meet with his clients at their houses). His relationship to me is as a father. Table of his usage of ICT This table clearly shows what forms of ICT my father uses and where he uses it: Technology ICT technology Home personal Home social In work Internet E-mail Emailing documents to himself (attachments) Contacting friends and family Contacting colleagues and clients and sending documents via attachments www Researching/browsing Occasional use of social networking to contact friends on holiday Research and communication (professional internet chat rooms) Internet Technologies Broadband Internet browsing, email Contacting friends and family via email Browsing, email Communication Mobile phone Storing and viewing photos, documents and games (known as apps) Contacting friends and family, storing contact details, email Communicating colleagues and clients; email. Bluetooth N/A Exchanging media with friends and family N/A Entertainment MP3/MP4 player Storing/playing photos and music Sharing and exchanging media Rare usage on business conferences Downloading pictures, text, music and videos (sky on demand) ...read more.

Sometimes, it is also used as a portable hard drive; however this cannot be used at work due to the lack of Itunes managing software that is required in order to use the iPod, and is not a requirement of the device due to ownership of a dedicated portable hard drive. How does an MP3 player work? The iPod is simple in its operation: 1. The 30gb integrated hard drive stores the files that are uploaded to it. 2. When selected, this data is sent to the processor within the player. This then decodes the format so that it can be played (the processor is only capable of decoding several formats such as MPEG-4 and MPEG2). 3. Following this, the decoded data is fed into the amplifier, which then plays the music through the 3.5mm headphone socket. The iPod is extremely clean and simple in appearance, and is very intuitive to use: The media player also has various pros and cons: Pros Cons The iPod offers an extremely simple and intuitive UI (user interface). The scroll wheel, although intuitive, can be inaccurate when scrolling lists and playing games. The hard drive offers more storage than an equivalent flash unit for a cheaper price. Flash memory, although more expensive and in lower capacities, offers improved speed, reliability and significantly more durability. Being so common, vast amounts of accessories are easily available for the iPod. Cases, speaker docks and more can easily be found from almost all retailers, something competing Samsungs, Sonys, Cowons and other devices lack. The iPod is crippled in that only several formats are supported. This is done to ensure that music is brought from ITunes and not other media marketplaces. People wishing to put other types of video and music will have to first convert into accepted formats (such as MPEG-4). ITunes is extremely simple and intuitive to use. Unlike many competing media managing suites, ITunes automatically updates details such as artists, albums and Genres when new songs are downloaded. ...read more.

This is the one aspect of his needs for which he found it almost perfect. Game sound through the speaker is crisp and adequately loud, and the various input methods (the multi-touch screen and the accelerometer) make the phone extremely intuitive and fun to use. However, the main strength of the phone from a gaming perspective is the Apple App store. Through this store, users are able to quickly and efficiently download many professional and user created games of various types. This feature remains unrivalled to other devices, and is still largely why this phone dominates the market. If my interviewee were to purchase a replacement phone, it would likely be the new Apple IPhone 3GS. This revised model features a more powerful camera and processor, along with improved battery life, software and reception. All of these improvements result in a device that would meet his needs significantly better than the device that he currently owns. Conclusion To conclude, my father uses a wide variety of ICT socially, personally and professionally. Generally, these technologies are effective in meeting his needs; however all have drawbacks that mean rival technologies may be more effective: * The internet is limited in its effectiveness because rival systems offer significantly improved feature sets, in terms of both safety and ease of use. * The iPod video is mainly limited by its lack of accepted formats and its forced partnership to ITunes. * The IPhone is limited by its poor reception and battery life. However, all of these technologies remain effective at the tasks for which they are intended; although other technologies may be superior for secondary features (e.g. the LG Renoir offers an improved camera over the IPhone). ICT has also had a tremendous impact on my father's working patterns. Although he is now working more and has less free time as a result of this, he believes that this is just how technology has developed, and considers this a mandatory part of almost any job rather than a flaw with his own. ?? ?? ?? ?? Andrew Gibson, 51213, 5052 ...read more.