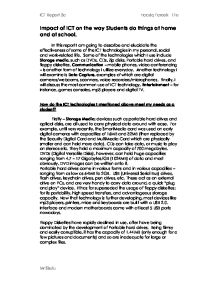 ICT - Impact of ICT on the way Students do things at home and at school.

Impact of ICT on the way Students do things at home and at school. In this report I am going to describe and elucidate the effectiveness of some of the ICT technologies in my personal, social and work-related life. Some of the technologies which I use include Storage media, such as DVDs, CDs, Zip disks, Portable hard drives, and floppy diskettes. Communication - mobile phones, video conferencing - is another form of technology I utilize everyday. Another technology I will examine is Data Capture, examples of which are digital cameras/webcams, scanners, voice recorders/microphones. Finally, I will discuss the most common use of ICT technology, Entertainment - for instance, games consoles, mp3 players and digital TV. How do the ICT technologies I mentioned above meet my needs as a student? Firstly - Storage Media; devices such as portable hard drives and optical disks, are all used to carry physical data around with ease. For example, until very recently, the SmartMedia card was used on early digital cameras with capacities of 16MB and 32MB (then replaced by the Security Digital Card and MultiMedia Card which are physically smaller and can hold more data). CDs can take data, or music to play on stereos etc. They hold a maximum capacity of 700 megabytes. DVDs (Digital Versatile Disks), however, can hold huge capacities ranging from 4.7 - 17 Gigabytes/GB (1024MB) of data and most obviously, DVD images can be written onto it. Portable hard drives come in various forms and in various capacities - ranging from as low as 64MB to 2GB. USB (Universal Serial Bus) drives, flash drives, keychain drives, pen drives, etc. These act as an external drive on PCs, and are very handy to carry data around, a quick "plug and play" device. It has far superseded the usage of floppy diskettes; for its portability, high speed transfers, and advantageous storage capacity. Now that technology is further developing, most devices like mp3 players, printers, mice and keyboards are built with a USB 2.0. ...read more.

which is now universally used, with a quick read and write speed, and capacities ranging from 32MB to 2GB. These cards are used in mobile phones too (not SD, MMC - they are similar although the SD is thicker) to store media, which can then be viewed on PCs with a media card reader (basically a USB device with slots for different media cards - nowadays computer come in-built with them) at leisure. It has replaced the physically larger, more delicate and smaller capacity SmartMedia Card). I use this technology practically everyday - taking digital photos, recording clips on camera and voice clips on the microphone. Advantages of Data Capture technology; * Video capture - CCTV (Closed Circuit Television) which is an indispensable security tool * Able to record/capture important moments/events... * ...Helping with many things such as fighting crime, determining machine faults, family moments to remember, etc * Easier to contact and keep in touch with friends Disadvantages: * Costly to buy digital cameras and camcorders * Lots of different specifications to look out for when buying leisurely data capture tools like voice recorders and digital cameras Data capture assists me during school, at home and in my social life constantly. How the technology meets my Personal Needs: I need to catch important events and memorable moments on video or as still images; for example, birthdays or anniversaries. I have recently video recorded my little cousin's 1st birthday and transferred the video to PC. After editing the video, I could send the video to my relatives in Sri-Lanka via email; they would be able to view it since the video is recorded straight to the SD card in AVI format. Evaluating Personal Needs: Although the conventional camera with film roll is ideal for pictures to develop straight away and put away in a photo album; a digital camera gives us a wider range of choices as well as the choice to have our pictures developed anyway. ...read more.

Uploading the file(s) onto a free server would be far too time-consuming - so a portable hard drive or CD would come in handy. This would only help to a certain extent, because; if I wanted to write it on CD, I would rather use a rewritable one as to be able to re-use it. The problem with this is, I wouldn't know whether my friend's optical drive supported CD-RWs (not all drives do), and I would not be able to find this out without asking them directly. Additionally, if I use a portable hard drive, namely a USB flash drive with a capacity of at least 256MB I wouldn't know without asking if he was using Windows XP (USB drivers are pre-installed) or any other OS with pre-installed drivers. MP3 players have a limit on what can be done to them. For example, a player which doesn't use a flash drive (Plug and Play) must have a CD to install drivers and necessary programs to access files on the hard drive. This is very limiting, because while you are able to freely change things at home on your MP3 player, if you're at a different location with another PC - which doesn't have the necessary drivers and programs - you wouldn't be able to read/write files on the hard drive. Work-Related: At school, I use storage media frequently to save files for reference at home. This helps me greatly when I do homework, and enables me to put into use the skills I have with many programs on my home PC. However, the drawback to this is, sometimes the school computer might not support certain parts of files e.g. If you encode a movie in .avi (Audio Video Interleaved) with a DivX codec, and the school PCs don't have the DivX codec in their system, you won't be able to play the file (in some cases sound can still be heard) and the only way to obtain this information beforehand is to check personally. ?? ?? ?? ?? ICT Report 3a Haaziq Farook 11o Mr Sisulu ...read more.