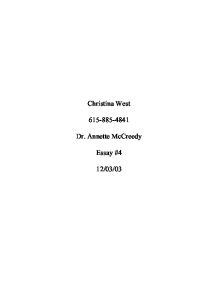 Isolation and addiction to the Internet.

Christina West 615-885-4841 Dr. Annette McCreedy Essay #4 12/03/03 Technology plays a drastic role in the lives of all people no matter what race, sex, or ethnic background. People today rely on computers to do almost everything, even to flush the toilet. It seems like there is always a way to make something easier by making a computer to do the job a human would normally do. With such a reliance on these machines, no wonder people have become entranced in the world of computers. The Internet is a huge advancement in this world. A single person can be connected to the world by just sitting at their computer desk with an Internet connection. Although computer technology and the Internet have advanced our economy, there are many underlying negative effects such as: isolation, irresponsibility, and unhealthiness do to excessive Internet use. Isolation can be caused by an addiction to the Internet. It occurs when a person has become so involved in the usage of the Internet that they stop going out with friends and family. Isolated people spend less time with family and more time on the computer. David N. Greenfield, psychologist and author of Virtual Addiction, states in his book, "Any revolution in the way we communicate is likely to have social and psychological implications. ...read more.

Those who used the Internet spend, on average, six hours a week on the Web (Biotech). Adults have more responsibilities and most cannot afford to spend that much time on the Internet. If that is the case, then some responsibilities are being neglected. Is it their children, job performance, or do they even go to work? A recent study by the Journal of the American Medical Association estimates that 44 billion dollars are lost each year in productivity because of work related depression - NEDS could cause a larger segment of that loss(PR).Tim Sanders and HeartMath (r) released new findings of a national study that links depression and symptoms of depression with the always-on-economy. Sanders has heard many stories from people who are struggling with what he calls NEDS- New Economy Depression Syndrome. NEDS is a self- reinforcing depression brought on by information overload and frequent interruption leading to an erosion of close personal relationships (PR). Employees are lacking interaction with each other. E-mail seems to be the better alternative instead of walking to the next room to talk to a coworker. This lack of personal communication can be emotionally and physically devastating. Depression is a major health problem resulting from overusing the Internet. ...read more.

"The Internet is an empowering resource, and even more so for people with disabilities who often experience more barriers to communications and to finding information," said Bethlyn Houlihan, MSW, MPH, lead author of The Impact of Internet access for People with Spinal Cord Injuries: a Descriptive Analysis of a Pilot Study. "This pilot study suggests that the Internet could improve emotional health and reduce social isolation not only for patients with SCI, but for those with other disabilities at risk of being socially isolated (Business)." The Internet can cause negative effects in the lives of people who don't have physical disabilities. These negative effects caused by being addicted to the internet all seem to tie together, almost as if it's a never ending circle. People who are depressed are more likely to be addicted to the internet, or as people who are addicted to the Internet tend to develop signs of depression. Not being around real people and friends and family eventually results in depression. Slacking off from responsibilities can cause an overload thus bringing on symptoms of depression. The Internet is excellent for the economy, but can be abused and made dire. One should use the Internet effectively, instead of demeaning its capabilities. Internet users today should regulate the time they spend connected to the virtual world, and make sure all of their responsibilities are taken care of before engaging in the Internet. ...read more.