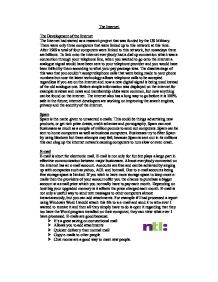 The Development of the Internet

The Internet. The Development of the Internet The Internet had started as a research project that was funded by the US Military. There were only three computers that were linked up to this network at this time. After 1969 a total of four computers were linked to this network, but nowadays there are billions. To link onto the internet everybody had a dial up connection which was a connection through your telephone line, when you wanted to go onto the internet a analogue signal would have been sent to your telephone provider and you would have been billed by them according to what your pay package was. The disadvantage of this was that you couldn't accept telephone calls that were being made to your phone numbers but now the latest technology allows telephone calls to be accepted regardless if you are on the internet and now a new digital signal is being used instead of the old analogue one. Before simple information was displayed on the internet for example reviews and news and membership clubs were common, but now anything can be found on the internet. The internet also has a long way to go before it is 100% safe in the future; internet developers are working on improving the search engines, privacy and the security of the internet. Spam Spam is the name given to unwanted e-mails. ...read more.

One of the most well known viruses is the 'I Love You' one which comes up in your e-mail account as a normal e-mail then the curious receiver opens it and wonders who sent this I love you e-mail, it turns out to be a viruses that deletes all the files on your computer. To deal with viruses that you can get on the internet you should download certain programs that prevent unknown things trying to access your computer. One of the most common internet securities is the Norton collections. Internet abuse Many people abuse the internet and what it offers. Paedophiles is a wide spreading problem and they use e-mail to lure people into traps they normally meet up with somebody they met over the net in discreet locations where they sexually assault them. Sexual content is the main abuse of the internet. People now even have virtual sex over the internet and strip in front of web camera just for fun, some of this is highly illegal and severe consequences await offenders. Advantages of the Internet > Vast amount of information available about almost anything > Knowledge of experts is easy to get hold of > Its good for communicating > Can access information whenever > Information is easy to get hold of > Its always up to date Disadvantages of the Internet > Can be costly when you have it for a long time > Its expensive to buy ...read more.

Below is a graph to represent the overall percentage of why people are still reluctant in using the internet. If people can't afford the internet I think that even if they don't have computer they should ask the government whether they are entitled to benefits this will give free access in internet cafes. Furthermore if you don't use the internet because of a lack in skill then all you have to do to discover the benefits of the internet is to attend a computer course at a local school or college, some of these are free and you may even get a qualification at the end of it. If you feel too old to use a computer then you should realise that you are never to old to do most things just because you feel too old it doesn't mean that you a restricted on the things that you do on a computer, just because of your age. The internet is set out to benefit all sorts of people. If you think that you have no computer access then you should realise that there are a lot of computers at libraries, internet cafes and even schools to use all you have to do in most cases is book one day before you intend to use them. If you don't want to use the internet you should at least try it and give it a go, then if you still don't want to use it then that's fair enough but you never know till you have tried it. ...read more.