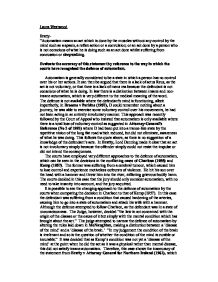 Automatism is generally considered to be a state in which a person has no control over his or her actions.

Laura Westwood Bratty- "Automatism means an act which is done by the muscles without any control by the mind such as a spasm, a reflex action or a convulsion; or an act done by a person who is not conscious of what he is doing such as an act done whilst suffering from concussion or sleepwalking. Evaluate the accuracy of this statement by reference to the way in which the courts have recognised the defence of automatism. Automatism is generally considered to be a state in which a person has no control over his or her actions. It can then be argued that there is a lack of actus Reus, as the act is not voluntary, or that there is a lack of mens rea because the defendant is not conscious of what he is doing. In law there is a distinction between insane and non-insane automatism, which is very different to the medical meaning of the word. The defence is not available where the defendant's mind is functioning, albeit imperfectly, in Broome v Perkins (1987), D could remember nothing about a journey, he was able to exercise some voluntary control over his movements, he had not been acting in an entirely involuntary manner. ...read more.

The external factor test was introduced in this case, involving a hypo-glycaemia diabetic who failed to eat after injecting insulin. The Judge commented, it would be "an affront to common sense to detain a diabetic when pushing a lump of sugar into his mouth would cure his problem" However, Where the cause of the behaviour is 'internal' such as a 'disease of the mind' or a disease of the body the relevant defence will be that of insanity rather than automatism such as in the case of Hennessy (1989). In this case of a hype-glycaemia diabetic it was the diabetes that caused the condition and not the insulin. As an external factor was not present this was deemed to be insane automatism. This is also the case with epilepsy, in Sullivan the defendant was held to be legally insane as it was held to be a 'disease of the mind.' The disease of the mind was given the very large scope of an impairment of "reason, memory and understanding." In light of these decisions it is surprising that in the case of T (1991), the court accepted that post traumatic stress, a disease of the mind, could satisfy automatism. However, because this condition had been caused by an outside factor, rape, the Judge allowed automatism to be put to the jury. ...read more.

There have been a number of criticisms to the defence of automatism, the main one being that distinguishing between internal and external causes leads to absurd and irrational distinctions - such as that drawn between Hennessy and Quick. The main reason given for the difference is that automatism caused by an internal factor, namely a disease, is more likely to recur than such a state caused by an external factor. This may be true of a comparison between an automatic state caused by a long-term mental illness, and one caused by a blow to the head, but as the cases on diabetes show, the distinction can be tenuous. The draft Criminal Code proposes maintaining the law on automatism as it stands, because the public interest is best served by the complete acquittal of anyone who acts while in a condition of non-insane automatism. This may be reasonable for the one-off offender, however, it offers no public protection against someone who is prone to recurring states of automatism through an external factor. Also the distinction between internal and external causes could be abolished. Reform of the insanity defence to bring it in line with medical descriptions would aim towards this; behaviour that was allegedly automatic but clearly did not fall within medical definitions of insanity could then be considered solely in the light of the danger of recurrence, and the element of recklessness in the behaviour of the accused. ...read more.

Summary: this is a very detailed and sophisticated essay that is written at a much higher level than expected for GCSE. Many degree level students would be pleased to be able to show the understanding of the defence shown here. Rating: *****