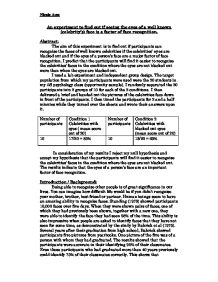 An experiment to find out if seeing the eyes of a well known (celebrity’s) face is a factor of face recognition.

I used a lab experiment and independent group design. The target population from which my participants were used were the 20 students in my AS psychology class (opportunity sample). I randomly separated the 20 participants into 2 groups of 10 for each of the 2 conditions. I then delivered a brief and handed out the pictures of the celebrities face down in front of the participants. I then timed the participants for 2 and a half minutes while they turned over the sheets and wrote their answers upon it.

In consideration of my results I reject my null hypothesis and accept my hypothesis that the participants will find it easier to recognise the celebrities’ faces in the condition where the eyes are not blacked out. The results indicate that the eyes of a person’s face are an important factor of face recognition.

The method that I used was a lab experiment. I chose this method because lab experiments give the researcher the ability to place all aspects of the environment under control as far as possible, and is arranged specifically for that particular study. At the start of the practical section of my study I placed a sign outside of the room letting all people walking past that there was a psychology experiment happening, and to be as quiet as possible so as not to disturb the participants. This can be found in the appendix [1]. I also made sure that all of the participants were not sitting too close to each other and to perform the task in silence.

I would like to take this opportunity to thank you all for taking part in my AS level Psychology coursework. All your results will be kept completely confidential, as I will only refer to you by number. You all have the right to withdraw from this experiment at any time and take no further part in this investigation, and naturally your results will not be used. I will give you each two sheets with twenty celebrities’ enpicted. All that is required of you is to write down by the picture the name of as many of the celebrities as you can. I will give you two and a half minutes to complete the task.