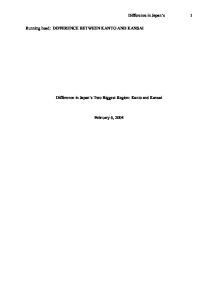 When people think about Japanese, they may think that Japanese society has similar way of thinking and behavior. However, when you have enough experience or exposure in many different part of Japan, you will know that Japan has a wide variety of people, with difference in many aspects of live. This paper will disclose differences in ways of thinking and behavior among Japanese living in different parts of Japanese regions.

The Kansai region of Japan, or also known as Kinki region, lies in the middle of Japan’s main island, Honshu. Japan’s capital was located in this area, up until the ruling of Edo era. Kansai region consists of several prefectures. These prefectures are Nara, Wakayama, Mie, Kyoto, Osaka, Hyogo and Shiga. Kansai region has a wide variety of old Japanese history and culture.

Kyoto was the capital of Japan from 794 until the transfer of the government to Tokyo in 1868 at the time of the Imperial Restoration ("Kyoto: History", n.d.). Located on the middle-western portion of the island of Honshu the city is surrounded by mountains. Today, it is the only major city in Japan that still has an abundance of prewar buildings, although modernization is continually breaking down the traditional Kyoto in favor of newer architecture, such as the Kyoto Station complex.

Difference between Kansai and Kanto region

There are two dominant flavors in Japanese cuisine. One is the kamigata flavor (Kansai area) and the other is Edo flavor (Tokyo area) (Naomichi, n.d.).

People in the Kanto region around Tokyo have traditionally preferred soba, while those in the Kansai region of Osaka and Kobe favor udon. Because of this, fewer restaurants in the Kanto region specialize in udon. Udon noodles are made from a mixture of water, salt, and wheat flour that has been kneaded, ripened, rolled flat, and cut into strips. The noodles are then boiled and served in hot broth or with a dipping sauce ("Noodles", n.d.).

The most common controversy to date is the difference in flavor between Kansai's udon and Kanto's soba. Along with udon, soba is one of the most common types of noodles in Japan. Made using a base of buckwheat flour, soba enjoys great popularity as a health food because it is high in protein, low in calories, and filled with vitamin B, dietary fiber, and other important nutrients. It is commonly eaten as cold zaru soba