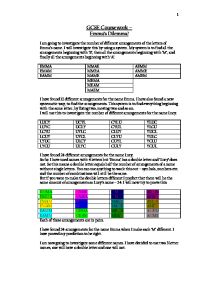 I have found 12 different arrangements for the name Emma. I have also found a new systematic way, to find the arrangements. This system is to find everything beginning with the same letter, by fixing two, moving two and so on.

I will use this to investigate the number of different arrangements for the name Lucy.

I have found 24 different arrangements for the name Lucy.

So far I have used names with 4 letters but ‘Emma’ has a double letter and ‘Lucy’ does not. So this means a double letter equals half the number of arrangements of a name without single letters. You can use anything to work this out – symbols, numbers etc. and the number of combinations will still be the same.

But if you were to make the double letters different I predict that there will be the same amount of arrangements as Lucy’s name – 24. I will now try to prove this:

Each of these arrangements are in pairs.

I have found 120 different arrangements for the name Rosie.

I have also proved my prediction to be right.

I will now investigate the name Tasha.

I have found 60 arrangements for the name Tasha.

If I made the make the ‘A’s different there would be the same amount of arrangements as Rosie.

We can also work out the nth term using this:

This is what I think the results may be if a name had a triple letter:

To seeif my predictions are correct, I will investigate names with a triple letter.

I will now investigate a four-letter word, with a triple letter; this name will be Lill.

These are the same as my results so the formula is correct.

I will now prove that N! works

I have also found out that a five-letter word with all the letters different has the same amount of arrangements as a four-letter word multiplied by five. The formula would be 4! * 5, the overall formula is (N-1)*N