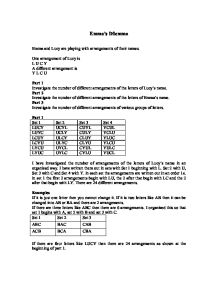 Emma and Lucy are playing with arrangements of their names.

One arrangement of Lucy is

A different arrangement is

Investigate the number of different arrangements of the letters of Lucy’s name.

Investigate the number of different arrangements of the letters of Emma’s name.

Investigate the number of different arrangements of various groups of letters.

If it is just one letter then you cannot change it. If it is two letters like AB then it can be changed into AB or BA and there are 2 arrangements.

If there are three letters like ABC then there are 6 arrangements. I organized this so that set 1 begins with A, set 2 with B and set 3 with C.

If there are four letters like LUCY then there are 24 arrangements as shown at the beginning of part 1.

I constructed a table to see if there were any connections between the number of letters and the different arrangements. Looking at the table of results I can see that there is a connection between the two columns.

I have found that 4!, works in finding the number of arrangements for Lucy’s name.

Using 4!, works because the word Lucy has 4 letters and this means there are 4 letters to start an arrangement with L, U, C or Y. After the first letter is picked there are 3 other letters to choose from e.g. if L was picked then only U, C and Y are left. After the first two letters are written there are 2 other letters that can be chosen e.g. if LU has been written then C and Y are left. After three letters have been picked there is only 1 letter left e.g. LUC is written and Y is left.

EMMA has 4 letters in her name so it would be expected that she has 24 arrangements because 4! is 24 (the 4! as explained in Lucy) but this is not the case because she has two Ms in her name. If the two Ms in Emma’s name were switched then this would make no difference to the number of arrangements as the name would be the same. So there are only 12 arrangements due to the fact that there are two Ms in the name. The 2 Ms have 2! arrangements. For each arrangement there is another the same with the Ms reversed.

Using the evidence gathered so far the formula might be n! divided by 2 if there are 2 repeated letters. The unique arrangements will only be half the total number of arrangements i.e. 24/2!

The problem with this is that the formula would not work for a 5 letter word with 5 repeated letters because 5!/5 = 24 as there is only one arrangement. This means that this formula is not the complete thing yet.

I am going to see if I can find the formula which lets me know the arrangements of a word with a letter repeated more than once based upon my results for Emma’s arrangements. I will use further examples carry this out.

AAAAB is a 5 letter word with 4 repeated As and this will be used as an example.

Again I have put the results in a table but it is impractical to make a table like the second one for Emma because there are will be 120 arrangements. Set 1 begins with A and set 2 begins with B. I have shown the arrangements of AAAAB when the As are all treated the same . With Emma’s name there are 2 Ms which meant that the number of arrangements was divided by 2. I have found that there are 5 different arrangements for AAAAB. This means that the formula for AAAAB is n! divided by 24. This can be put simpler by saying 5!/4! = 5.

It can be seen how 120 is divided by 24 because the As when written fully to give 120 arrangements would be sorted out with 4 identical arrangements.

If the As were taken out and labelled A1A2A3A4 and treated as a separate word it would have 24 different combinations because of 4! This is why 120 is divided by 24 in 5!/4!

This is the table showing me that there are 6 different arrangements of AABB.

I will now do this with other words and arrangements to prove that the formula works.

A, B, and C represent each repeated the number of times a single letter is repeated.