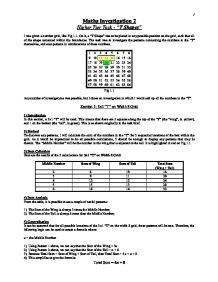 I was given a number grid, like Fig 1.1. On it, a “T Shape” was to be placed in any possible position on the grid, such that all of the shape remained within the boundaries. The task was to investigate the patterns connecting the numbers in the “T” themselves, and also patterns in combinations of these numbers.

Any number of investigations was possible, but I chose an investigation in which I would add up all the numbers in the “T”.

To discover any patterns, I will calculate the sum of the numbers in the “T” for 5 sequential locations of the box within the grid. As it would be impractical to do all possible calculations, 5 should be enough to display any patterns that may lie therein. The “Middle Number” will be the number in the wing that is adjacent to the tail. It is highlighted in red on Fig 1.1.

Here are the results of the 5 calculations for 3x1 “T” on Width 8 Grid:

From the table, it is possible to see a couple of useful patterns:

It can be assumed that for all possible locations of the 3x1 “T” on the width 8 grid, these patterns will be true. Therefore, the following logic can be used to create a formula where:

n will continue to be used for the Middle Number in the “T” i.e. the location of the “T” upon the grid.

Varying values of w will be tested to give different widths of wings for the “T”. The widths will be 5, 7 and 9. Only odd numbers can be used for the wing width, because the “T” always has an equal number of boxes either side of the Middle Number. With these "T”s, in 5 different locations on the width 20 grid, the Total Sum will be calculated.

Width 20 must be used for this section because when varying the widths of “T”, the grid must be wide enough to give a good range of values for data collection, and later testing.

From the tables (a)-(c), it is possible to see that when only the wing width is varied, only the Sum of the Wing changes. In fact, if we take one constant Middle Number, 25, from each of the above tables, we get the following:

From these tables, it is possible to see a useful pattern:

Now, using the already justified “wn”, the Total Sum formula can be created:

After this justification, it can now be said that for every possible wxl “T” on a Width g Grid, the Total Sum of all of the squares contained within it is wn + ½ l {2n + g(l + 1)}.

From the simple study of a 3x1 “T” on a width 8 grid, I have been able to progress all the way to the formula to find the sum of the “T” on any width grid. Patterns were easy to spot early on, however when advancing into more complex areas of the project, like the last section where three different variables were altered, spotting patterns became more difficult and knowledge from the prior sections was required to find the formula.

Overall, the best way of presenting the results was in tables because there was an obvious pattern of values in the “Difference” column, because they were all in one line. A graph or diagram would not have been as suitable because the patterns would not have been as apparent, except in a linear progression but this is easily seen in a pattern as the numbers incrementing by a constant amount each time.

There are limitations on the formula though. The width of the wing must be never create a situation where any boxes are outside the grid. This relies on the middle number being chosen carefully to ensure, even if the wing width appears it will fit on the grid (like a Wing Width of 8 on a Width 50 Grid), that it is not so close to the edge that the “T” is not wholly on the grid.

The final justified formula is that the Total Sum  =