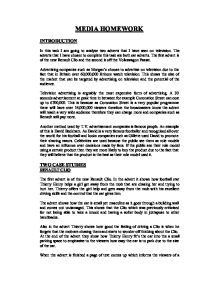 Advertising companies such as Morgan’s choose to advertise on television due to the fact that in Britain over 60,000,000 Britons watch television. This shows the size of the market that can be targeted by advertising on television and the potential of the audience.

Television advertising is arguably the most expensive form of advertising. A 30 seconds advertisement at peak time in between for example Coronation Street can cost up to £700,000. This is because as Coronation Street is a very popular programme there will have over 14,000,000 viewers therefore the broadcasters know the advert will reach a very wide audience therefore they can charge more and companies such as Renault will pay more.

Another method used by T.V. advertisement companies is famous people. An example of this is David Beckham. As David is a very famous footballer and recognised all over the world for his football and looks companies such as Gillette used David to promote their shaving razors. Celebrities are used because the public see them as role models and have an influence over decisions made by fans. If the public see their role model using a certain product then they are more likely to buy the product due to the fact that they will believe that the product is the best as their role model used it.

The first advert is of the new Renault Clio. In the advert it shows how football star Thierry Henry helps a girl get away from the mob that are chasing her and trying to hurt her. Thierry offers the girl help and gets away from the mob with his excellent driving skills and the control that the car gives him.

The advert shows how the car is small yet masculine as it goes through a building wall and comes out undamaged. This shows that the Clio which was previously criticised for not being able to take a knock and having a softer body in juxtapose to other hatchbacks.

Also in the advert Thierry shows how good the feeling of driving a Clio is when he forgets that the mob are chasing them and starts to wonder off thinking about the Clio. At the end of the advert they show how Thierry Henry fit’s the car into the a small parking space to emphasize to the viewers how easy the car is to park due to the size of the car.

When the advert is finished a page of text comes up which informs the viewers of a number they can call to get more information on the car and also the manufacturers website address. This is all done to make the viewers take the next step and actually contact Renault to test drive the car or to purchase the car.

The advert uses intertextuality from the Hollywood hit film From Criminal Intent (1986). This is used to remind people of the film that they saw and makes them watch on to see if the advert gets the same ending as the chase in the movie. Also by using intertextuality if the viewers have seen the movie, show or read the book from where the advert is copied from it makes them feel clever and to watch the whole advert.

I think Thierry Henry was used in this advert because he is French and Renault is a French company. As they have used a very good French player it will make people think that the car is also good because it is made by the French. Also I believe that by using Thierry Henry they have also given the car a more masculine and sporty touch something that Renault have been lacking for a long time.

The VW Passat advert begins in a city with a man in a car sticking his head out the window speaking into a microphone saying “ Because daddy never hugged me”. He repeats the same word three times as a couple in a VW Passat stare at him and drive off.

The couple then stop at the traffic lights where they notice a blonde driving a red convertible. She also speaks in a microphone and says “ Because the more guys notice me the more I love myself”.

The advert ends with the couple laughing at all the other drivers they have seen and thinking about how weird they were. The end of the advert also shows the VW Passat name badge at the back of the car and a sigh that says “ Low ego emissions”.

According to my research VW is the cheapest German car in comparison to luxury cars such as the BMW or Mercedes. This shows that Volkswagon aim there car sales at working class people and not people at the higher end of the market who earn a lot of money or are self employed.

The advert also shows that in comparison to the other sporty luxury cars shown in the advert the Passat attracts less attention from the people who are passing by. This could be a good thing because it can mean that less people will try to steal the car or damage it because it will be less noticed compared to the Mercedes and BMW.

Also the advert shows how happy the couple in the Passat are compared to the other drivers driving the more expensive cars.

The target market for the VW Passat is for people in their mid twenties and early thirties. According to ITV1 an estimated 7,000,000 watching the programme fall into this category therefore VW have reached their advert to approximately 7,000,000 people.

The audience who see the advert will get the message that the Passat is the car to have if you cant afford expensive sports and luxury cars. In the advert it shows the Passat has leather interior which is seen as a luxury inside a car. The viewers of the advert may read the Passat as a cheaper version to the more expensive German cars.