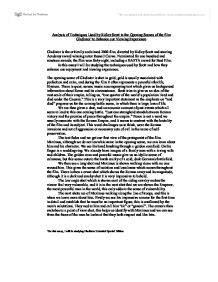 Analysis of the Opening scenes of the film Gladiator

Analysis of Techniques Used by Ridley Scott in the Opening Scenes of the film Gladiator� to Enhance our Viewing Experience Gladiator is the critically acclaimed 2000 film, directed by Ridley Scott and starring Academy award winning actor Russell Crowe. Nominated for one hundred and nineteen awards, the film won forty-eight, including a BAFTA award for Best Film. In this essay I will be studying the techniques used by Scott and how they enhance our enjoyment and viewing experience. The opening scene of Gladiator is shot in gold, gold is usually associated with perfection and calm, and during the film it often represents a peaceful afterlife, Elysium. There is quiet, serene music accompanying text which gives us background information about Rome and its circumstance. Scott tries to give us an idea of the vast scale of their empire, telling us, "one quarter of the world's population lived and died under the Caesars." This is a very important statement as the emphasis on "and died" prepares us for the coming battle scene, in which there is large loss of life. We are then given a date, and an accurate account of past events which all seem to lead to this one coming battle. "Just one stronghold stands between Roman victory and the promise of peace throughout the empire." Peace is not a word we usually associate with the Roman Empire, and it seems to contrast with the brutality of the film and its subject. This word challenges us to think, were the Roman invasions and act of aggression or necessary acts of evil in the name of self-preservation. ...read more.

We then get our first glimpse of "the enemy" general. Though we can only assume the Romans were the aggressors and the Germans had done them no wrong. He is holding the head of the murdered messenger and he throws it into the muddy ground, where it squelches, disgusting the viewers the close up of this is repulsive and shows the beginnings of the horror that is about to be unleashed. We are then shown another long shot, and behind the barbarian warlord comes his army. They appear as if from nowhere, advancing menacingly from the fog. Quintus, a Roman officer then remarks. "People should now when they're conquered." Maximus responds, "Would you Quintus? Would I?" This rhetorical question raises an interesting issue which make the audience think about the nature of war and also surrender. We are then shown Maximus' interesting ritual which is repeated before every major fight. He picks up dirt from the ground and rubs it between his hands. Throughout the film this is almost a signal that violence will ensue. The theme of the afterlife then continues as Maximus orders, "At my signal, unleash hell." Death and the afterlife are major recurring themes of this film and it portrays life almost as a journey to the afterlife, with Elysium as the destination which is to be worked towards. Maximus is then shown riding towards his cavalry, where he gives them an inspirational speech. He addresses them as "Fratres" or brothers. We then learn that he is leaving the army and "three weeks from now (he) will be harvesting (his) crops." ...read more.

Scott is challenging us to decide if it is a victory as so much life was lost on both sides. We then zoom slowly into a big close up of the Emperor, who looks both aggrieved and relieved. The battle scene cuts and we are shown the relative harmony of a carriage travelling along the road; this carriage contains the Emperor's son and daughter who are dressed in elaborate clothes. We make a link between Commodus and the Emperor as they are wearing almost exactly the same blue clothes, seeing Commudus attired in the same dress as the Emperor; we get the idea of a child aspiring to be like their father. We cut back to the battle field, where Maximus retrieves the cavalry sword he lost in a tree during the battle. He is bloody and scarred from the fight. The music is a highly important part of the battle scene. It sets the tempo and often has the effect of making you sad, for example, the slow music at the end of the battle or making the scene tense and exciting, as it does when the cavalry are charging. The next scene is designed to both shock us and inform us about the aftermath of the battle. The camera follows Maximus through the hospital, passing soldiers with terrible wounds. On more than one occasion we see stumps, where limbs have been hacked off during the battle or amputated afterwards. This scene is a steadicam shot, and we feel as though we are part of the terrible events that are unfolding, and it makes the experience more shocking, as we move closer to Maximus, we can see the horror on his face. ...read more.