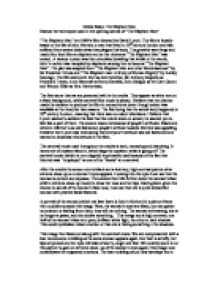 Looking into the eyes I can see that the woman is content and at peace. The camera then tilts further down the woman's face (still in extreme close-up mode) to show her nose and her lips. Having been given the chance to see all of the woman's face now, I can see that she is quite a beautiful woman with pristine facial features. A portrait of the woman (which we later learn is John's Mother) in a picture frame then quickly succeeds this image. Now, the woman's eyes are black, one can gather no emotion or feeling from them, they tell me nothing. The woman is frowning, she is no longer at peace, and she doubts something. This image too is high contrast; one half of the woman's face is in pure, brilliant white light, the other in dark shadow. This could symbolise mixed emotion or that she is hiding something n the shadows. This image then fades out along with the carnival music. We are now presented with a low monotonous rumbling as the same woman appears again. ...read more.

The screen then fades out to black again. We are then presented with a long shot clip at eye level of elephants marching towards the camera. This angle then tilts to a low angle so that we are looking up at the elephants, as if struck down by them. The screen again, fades to black. Now, there is an elephant with its trunk raised in the air and it's tusks thrust forward, looking ready to attack. A low-key image of the woman appears again, her face barely recognisable, the elephant's trunk swipes at her and knocks her to the ground. A high angle shot of the woman is now on screen, it gives the idea that we are the elephant. The woman is screaming inaudibly, in pain? In fear? Or in labour? The shots then oscillate between a low angle shot looking up at the elephant and a high angle shot looking down on the mother. The screen, once again cuts to black, then slowly a wisp of smoke rises into the air. Magicians often use smoke, I think that because this clip of smoke is accompanied by the diegetic sound of a baby crying, it symbolises the magic of birth. The screen finally, cuts to black. ...read more.