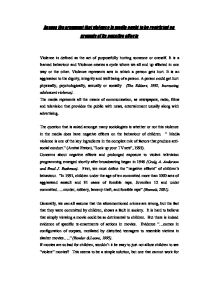 Assess the argument that violence in media ought to be restricted on grounds of its negative effects Violence is defined as the act of purposefully hurting someone or oneself. It is a learned behaviour and Violence creates a cycle where we all end up affected in one way or the other. Violence represents acts in which a person gets hurt. It is an aggression to the dignity, integrity and well being of a person. A person could get hurt physically, psychologically, sexually or socially (The Editors, 1992, Increasing adolescent violence). The media represents all the means of communication, as newspapers, radio, films and television that provides the public with news, entertainment usually along with advertising. The question that is asked amongst many sociologists is whether or not this violence in the media does have negative effects on the behaviour of children. " Media violence is one of the key ingredients in the complex mix of factors that produce anti-social conduct." (Amitai Etzioni, "Lock up your TV sets", 1993). Concerns about negative effects and prolonged exposure to violent television programming emerged shortly after broadcasting began in 1946 (Craig A. Anderson and Brad J. Bushman). First, we must define the "negative effects" of children's behaviour. ...read more.

The number and frequency of violent acts and episodes were charted for a range of varying types of programme. Television drama emerged as highly violent in character, an average of 80 per cent of such programmes contained violence, with a rate of 7.5 violent episodes per hour. Children's programme, including cartoons, displayed an even higher level of violence, however killing was not portrayed as much. (Gerbner et al, 1979, Gunter, 1985). Another study that was conducted reanalysed over 200 existing major studies on television violence (Paik and Comstock, 1994). It concluded that although the various studies showed different degrees of influence, there is "a positive and significant correlation between television violence and aggression behaviour". Robinson also came to similar conclusions. Third and fourth grade students at two elementary schools were asked to report the amount of time spent watching TV and videos and playing video games. Students were challenged to abstain from watching television and video games for ten days, then asked to restrict TV-watching and video game playing to seven hours a week. Children were then asked to rate their classmates aggression at the beginning of the study (September 1996) and at the end of the study (April 1997). Robinson says there were about 2.5 per cent fewer reports of aggression in the test group than in the control group, (Robinson 1997). ...read more.

Randomised experiments indicate that exposure to violent or antisocial rap videos can increase aggressive thinking, but no research has yet tested how such exposure directly affects physical The impact of video games containing violence has recently become a focus of research because children are supposedly more susceptible to behavioural influences when they are active participants than when they are observers. To date, violent video games have not been studied as extensively as violent television or movies. The number of studies investigating the impact of such games on youth aggression is small, there have been none on serious violence. Even when it seems that there is clear evidence that a link exists between violence and aggressive behaviour, it is not a definitive fact. However it is important to watch this matter closely without ignoring that although the media violence is not the only cause of violent behaviour it has a great influence on it. When an individual is exposed to all the other factors and in top of it watches TV absorbing all the negative messages is a terrible combination. The society that we live in is stressful enough and the media is not doing much to help reduce that stress. We all need to remain open minded in trying to find solutions that will help the younger generation cope with this matter. ...read more.