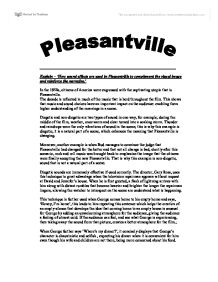 Explain How sound effects are used in Pleasantville to complement the visual image and reinforce the narrative.

Explain - 'How sound effects are used in Pleasantville to complement the visual image and reinforce the narrative.' In the 1950s, citizens of America were engrossed with the captivating utopia that is Pleasantville. The decade is reflected in much of the music that is herd throughout the film. This shows that music and sound choices have an important impact on the audience: enabling them higher understanding of the meanings in a scene. Diegetic and non-diegetic are two types of sound in one way, for example; during the middle of the film, weather, once warm and clear turned into a soaking storm. Thunder and raindrops were the only vibrations of sound in the scene; this is why this example is diegetic, it is a natural part of a scene, which enhances the meaning that Pleasantville is changing. Moreover, another example is when Bud manages to convince the judge that Pleasantville had changed for the better and that not all change is ...read more.

If the audience can feel, and see what George is experiencing, then taking away the sound from that picture, creates a better atmosphere for the film.; When George further says 'Where's my dinner?', it concisely displays that George's character is chauvinistic and selfish , expecting his dinner when it is convenient for him even though his wife and children are not there, being more concerned about his food. Pathetic Fallacy is giving inanimate objects human qualities. The weather in the film changes to mirror the actions of the residents of Pleasantville which reflects in conflict with the older residents because they are unwilling for things to change causing their behaviour to be compared to actually events that occurred in America during the 1950s. Black people were treated horrifically and had very few rights, this happened to the people of colour in Pleasantville. ...read more.

Immediately after the pair found themselves in Pleasantville, the music changes from a dangerous tune to a calm, pleasant sound. The music changed at that point because they entered a different setting and atmosphere. 'Rave On' by Buddy Holly was the song played on the diner jukebox as the people in colour read through the new Pleasantville code of conduct. This particular song helps to display to the audience that the people in colour are not going to follow the new code of conduct and are going to stand up to the residents of Pleasantville. The lyrics within the song, 'Rave On' suggest that the residents can bring in as many rules as they want but it won't stop the people in colour fighting back and living how they deserve. Overall, the complete structure and effects in the film were used vividly making it so even young children can easily grasp meanings which help the audience understand that nothing in reality is perfect and there will always be conflict. ...read more.