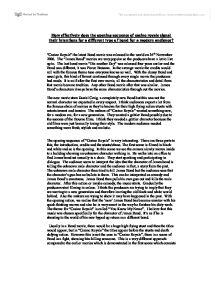 How effectively does the opening sequence of casino royale signal their intentions for a different type of bond for a modern audience?

How effectively does the opening sequence of casino royale signal their intentions for a different type of bond for a modern audience? "Casino Royale" the latest Bond movie was released to the world on 16th November 2006. The "James Bond" movies are very popular so the producers have a lot to live up to. The last bond movie "Die another Day" was released four years earlier and the Bond was different, it was Pierce Brosnan. In the average movie the credits would roll with the famous theme tune everyone knows so well. With the classy Bond and usual girls, this kind of format continued through every single movie the producers had made. It is as if after the first ever movie, all the characteristics and detail from that movie became tradition. Any other Bond movie after that was similar. James Bond's characters always have the same characteristics through out the movies. The new movie stars Daniel Craig, a completely new Bond but this was not the normal character we expected in every respect. I think audiences expect a lot from the famous chain of movies as they're known for their high flying action stunts with entertainment and tension. The makers of "Casino Royale" wanted something new, for a modern era, for a new generation. ...read more.

However this is not the case in "Casino Royale", there is a scene of Bond in a fight, showing him killing someone. This is a very different approach compared to the earlier movies which is demonstrated in the first scene which consists of the fight between Bond and an enemy in the public toilets. We see our hero defeating him and killing him in very different but interesting ways. Normally a Bond would make use of a pistol to kill the rival, but the new bond drowns his face in a sink killing him. Also this new bond looks very modern and grittier. He has a loose tie and changes the classic black suit with a grey one plus he has blonde hair. This is a sign that he has definitely been altered physically. After the first fighting scene, the credits begin. James Bond movies are famous for their 'Bond Girls'. The credits do not seem to involve any women apart from when it shows the queen from a deck of playing cards, and the face has the face of the bond movie girl. This is the only time the audience witnesses the face of this girl. Also on the film poster, the girl is in silhouette form as they want the new James Bond to stand out. ...read more.

The only female character we observe is in the credits and it's her face only. From this we can presume she is the main female character. They don't show much of the female character for the reason that I think they want the new James bond character to really stand out and make an impact. If they can make the new character stand out more than the women, he will be a focal point in the movie and many people who watched the movie will remember him. The producers wanted this movie to be all about Bond, so therefore I believe this is why female characters are not used too strongly in the beginning of the movie. This movie is definitely different from the rest of the franchise. Although at the same time I still believe it is an improvement. Never the less the older fans of the classical James Bond will involuntarily dislike the movie in my opinion because they will like the old Bond too much. In their minds he is a great icon n then this new bond from "Casino Royale" ruins the whole legend of "James bond". There are two sides of the argument but my personal opinion is with the intention of this new Bond character was a good idea as he will appeal to most fans and as the whole world has hit a new era, I think it's fair that the movies should as well. ...read more.