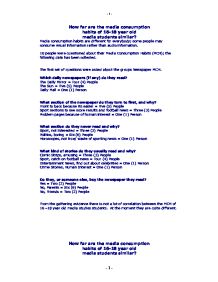 How far are the media consumption habits of 16-18 year old media students similar?

How far are the media consumption habits of 16-18 year old media students similar? Media consumption habits are different for everybody; some people may consume visual information rather than audio information. 10 people were questioned about their Media Consumption Habits (MCH); the following data has been collected. The first set of questions were asked about the groups Newspaper MCH. Which daily newspapers (if any) do they read? The Daily Mirror = Four (4) People The Sun = Five (5) People Daily Mail = One (1) Person What section of the newspaper do they turn to first, and why? Front to back because its easier = Five (5) People Sport sections to see score results and football news = Three (3) People Problem pages because of human interest = One (1) Person What section do they never read and why? Sport, not interested = Three (3) People Politics, boring = Six (6) People Horoscopes, not true/ waste of sporting news = One (1) Person What kind of stories do they usually read and why? Comic Strips, amusing = Three (3) People Sport, catch on football news = Four (4) ...read more.

The next set of questions were asked about the groups Magazine MCH What magazines (if any) do they read? Thrasher Skateboard Magazine = Two (2) People 'More' = Two (2) People Rugby World = One (1) Person FHM = Five (5) People What sections of the magazine do they read and not read, and why? All of it, I don't want to miss any thing = Eight (8) People Look at Pictures, The girls are so fit! = Two (2) People From these answers we can only hope that the group are avid readers. How far are the media consumption habits of 16-18 year old media students similar? The penultimate set of questions asked were about the groups Radio MCH What stations do they like the best and why? Kiss 100, because it has new songs = Five (5) People Capital, it plays good songs new and old = Two (2) People Heart, it plays all the old classics = One (1) Person Pirate, underground songs are better than commercial songs = Two (2) People Approximately how many hours a week do they spend listening to the radio? ...read more.

Cinema: 50% have seen 1 or 2 in the last month. In other places, 70% of the group have seen 3 or 4 films. 80% of the group are very sociable all watching films with their friends. 60% of the group decide what films to watch by voting. Magazines: The group is very picky when it comes to magazines, but it looks as if Half of the group like FHM, lets hope that's boys. 80% of the Group enjoy reading all of their magazine. Radio: Kiss 100 is our groups choice with half of them tuning in to listen to this station. 40% listen up to 2hours of radio. 70% listening to the radio in the evening A Massive 80% hate Classic FM. 50% listen alone while the other half listen with friends. The Loners are focused 100% to there station, where as the half, who listen with friends, prefer chatting while the radio is on. Internet: 90% of the group access the internet daily at home. The main reason for going on the internet, 40% say "playing games for entertainment" 90% listen to music and chat using MSN Messenger when online by Louis Verrier Sheddie Productions - 6 - - 6 - ...read more.