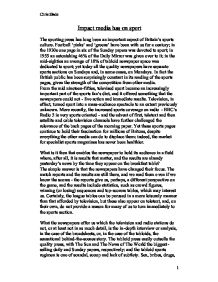 Impact media has on sport

Impact media has on sport The sporting press has long been an important aspect of Britain's sports culture. Football 'pinks' and 'greens' have been with us for a century; in the 1930s one page in six of the Sunday papers was devoted to sport; in 1955 an astonishing 46% of the Daily Mirror was given over to it; in the mid-eighties an average of 18% of tabloid newspaper space was dedicated to sport; yet today all the quality newspapers have separate sports sections on Sundays and, in some cases, on Mondays. In fact the British public has been surprisingly constant in its reading of the sports pages, given the strength of the competition from other media. From the mid nineteen-fifties, televised sport became an increasingly important part of the sports fan's diet, and it offered something that the newspapers could not - live action and immediate results. Television, in effect, turned sport into a mass-audience spectacle to an extent previously unknown. ...read more.

What the newspapers offer us which the television and radio stations do not, or at least not in as much detail, is the in-depth interview or analysis, in the case of the broadsheets, or, in the case of the tabloids, the sensational behind-the-scenes story. The tabloid press easily outsells the quality press, with The Sun and The News of The World the biggest-selling daily and Sunday papers, respectively: and the tabloid sports regimen is one of scandal, scoop and lack of subtlety. Sex, bribes, drugs, booze, player-transfer scoops, manager-sacked scoops, why-England-must-beat-Zimbabwe-or-go-home-in-disgrace specials: all of these sell newspapers, whether or not they are factually accurate, relevant, fair or even well-written. Punning headlines with an increasingly tenuous connection to the English language have become the norm, and many of them are personally insulting and even vulgar; occasionally they are funny. Graham Taylor, the hapless former manager of the England football team, was subjected to a sustained and vindictive personal attack from the tabloids which visibly altered his public persona and no doubt caused considerable pain and upset to himself and his family - 'turnip' was one of the kinder epithets used about him. ...read more.

I believe that media has a massive impact on sport and the media are now everywhere. There is no way to avoid the media if you are a sportsman and this is the problem. The media love to destroy the so called image that sports people have. David Beckham for instance was persecuted over the whim of his former Pa telling the world that they had an illicit affair. This caused uproar and people were saying that David Beckham cannot captain England due to the allegations. This then put the football star on edge and his performance during Euro 2004 was much blamed on this slander. Concluding this information the sports stars of today have to be on their best behaviour all the time, if they do anything that could look bad the media will find out about it. The media have the responsibility to inform the public of what they do. Unfortunately they inform the public of all the bad things that sportsman do and not enough of the good things and if they do inform us of something good they tend to still put a negative in there to balance the story. ?? ?? ?? ?? Chris Slade 1 ...read more.