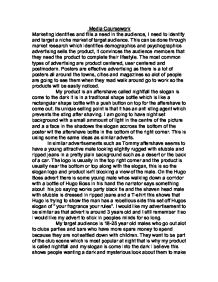 Media Coursework Marketing identifies and fills a need in the audience, I need to identify and target a niche market of target audience. This can be done through market research which identifies demographics and psychographics advertising sells the product, it convinces the audience members that they need the product to complete their lifestyle. The most common types of advertising are product centered, user centered and postmodern. Posters are effective advertising as there is a lot of posters all around the towns, cities and magazines so alot of people are going to see them when they read walk around go to work so the products will be easily noticed. My product is an aftershave called nightfall the slogan is come to the dark it is in a traditonal shape bottle which is like a rectangular shape bottle with a push button on top for the aftershave to come out. ...read more.

On the Hugo Boss advert there is some young male whos walking down a corridor with a bottle of Hugo Boss in his hand the narrator says something about his job saying works party black tie and the shaven head male with stubble is dressed in ripped jeans and a T-shirt this shows that Hugo is trying to show the man has a rebellious side this set off Hugos slogan of " your fragrance your rules". I would like my advertisement to be similar as that advert is around 3 years old and I still remember it so i would like my advert to stick in peoples minds for so long. My target audience is 18-25 year old males who go out alot to clubs parties and bars who have more spare money to spend because they are not settled down with children. ...read more.

They show the lifestyle of the person in the picture as a very positive and desirable lifestyle because they trying to put accross that the consumer can have this lifestyle if you buy and use the product, this fills the need of the customer to reach that perfect lifestyle. My advertisements will apppear in lads magzines such as Nuts, Zoo, FHM etc. They will appear on billboards accross the country with a dark night backdrop of a street with a single lampost with a shadow forming and a faded view of the product. They will also appear on adverts during sport events and thriller, comedy and action films. This is because males around 18-25 are likely to watch certain types of films and read certain types of magazines so I believe this choice of advertising placements will be the best choice for my product. I hope to use something rememorable in my advertisement such as a catchy slogan so that my product will stick in the audiences head . Jordan Whittaker ...read more.