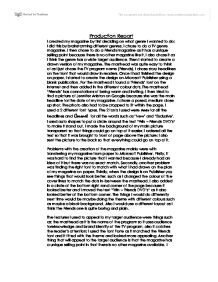 Production Report of Designing a Magazine

Production Report I created my magazine by first deciding on what genre I wanted to do; I did this by brainstorming different genres. I chose to do a TV genre magazine. I then chose to do a Friends magazine as it has a unique selling point because there is no other magazine like it. I also chose it as I think the genre has a wide target audience. Then I started to create a drawn version of my magazine. The masthead was quite easy to think of as I just chose the TV program name (Friends). I chose story headlines on the front that would draw in readers. Once I had finished the design on paper, I started to create the design on Microsoft Publisher using a blank publication. ...read more.

Problems with the creation of the magazine mainly were with transferring my magazine from paper to Microsoft Publisher. Firstly, it was hard to find the picture that I wanted because I already had an idea of it but there was no exact match. Secondly, another problem was finding the right font to match with what I had drawn on the plan of my magazine on paper. Thirdly, when the design is on Publisher you see things that would look better, such as I changed the colour of the cover lines to match the dots in-between the masthead. I also added in a circle at the bottom right-rand corner of the page because it looked better and I moved the text "Win - Friends DVD's" as it also looked better at the bottom corner. ...read more.

On my magazine the things I like are: the title looks a lot like the Friends brand even though I made it in another way instead of just getting a picture; the style of font used for plug words because it is quite childish like the friends font but also quite stylish and I like how the fonts on the contents page matches up with the front page as it keeps consistency and could work as brand identity. The thing I dislike is that nothing seems to stand out enough to catch the buyer's attention or to draw people in. I think that the issues the target audience will have with it are that although the title is the same font as the Friends logo the layout and design isn't very in keeping with the program. ?? ?? ?? ?? ...read more.