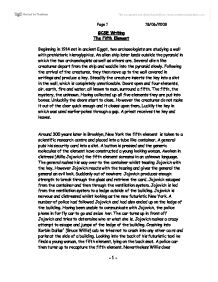 GCSE Writing The Fifth Element Beginning in 1914 set in ancient Egypt, two archaeologists are studying a wall with prehistoric hieroglyphics. An alien ship later lands outside the pyramid in which the two archaeologists as well as others are. Several alien like creatures depart from the ship and waddle into the pyramid slowly. Following the arrival of the creatures, they then move up to the wall covered in writings and produce a key. Steadily the creature inserts the key into a slot in the wall, which is completely unnoticeable. Doors open and four elements, air, earth, fire and water, all known to man, surround a fifth. The fifth, the mystery, the unknown. Having collected up all five elements they are put into boxes. Unluckily the doors start to close. However the creatures do not make it out of the door quick enough and it closes upon them. Luckily the key in which was used earlier pokes through a gap. A priest receives the key and leaves. Around 300 years later in Brooklyn, New York the fifth element is taken to a scientific research centre and placed into a tube like container. ...read more.

of things when she escapes from the tube and tries to analyze all of the people who could be threats to her. Its pretty much robotic how she looks at everything due to the speed of what she is looking at. When she gets to the ledge of the building we get a tilt shot from when she looks down and back up, we really get a feeling of how high Jojovich really is. Another shot is when the camera moves with the motion of the car when Willis turns the steering wheel when trying to escape from the police. It gives us a feeling of the speed and the angle in which Willis is driving at. We see one of Luc Bessons' best shot the over the shoulder into the mirror shot. Besson used many of these shots in the sequence. Its really effective as it shows his view of the fifth element and also helps us to go further into the movie in more detail. There is a range of editing shot in the sequence like when there is a shot of the city, which is on for a reasonably long amount of time, which helps us develop an understanding for the enormity. ...read more.

The music in the car scene does not suit the event happening. It makes you feel as if nothing is going to go wrong. It also makes the chase more fun as well as interesting. Its pretty much as though they were having fun doing, and experiencing the chase. Script and dialogue can sometimes be funny as when things are said from one character to another that character does the opposite or something stupid. For instance the part where the policeman says "Thank you for your co-operation" insists that Willis is not going to co-operate. It also as if the film is hinting the audience that he is going to try and escape. There is also irony in the sequence when Willis says "If they don't chase you after a mile, they wont chase you at all" but to Willis' dismay they continue to chase after the mile. So he comedically says "Maybe two miles". I think that this film was planned out well to get all of the above to fit in nicely. There was not too much humour etc and not to little. I think that Luc Besson is an extremely talented film director to have made such a thrilling futuristic film. ?? ?? ?? ?? Page 1 18/06/2008 - 1 - ...read more.