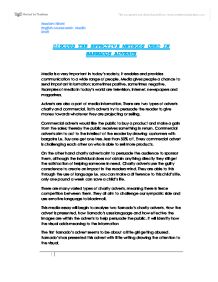 This media essay will begin to analyse two Barnados charity adverts. How the advert is presented, how Barnados uses language and how effective the images are within the adverts to help persuade the public.

DISCUSS THE EFFECTIVE METHODS USED IN BARNADOS ADVERTS Media is a very important in today's society. It enables and provides communication to a wide range of people. Media gives people a chance to send important information; sometimes positive, sometimes negative. Examples of media in today's world are television, internet, newspapers and magazines. Adverts are also a part of media information. There are two types of adverts charity and commercial. Both adverts try to persuade the reader to give money towards whatever they are projecting or selling. Commercial adverts would like the public to buy a product and make a gain from the sales; thereby the public receives something in return. Commercial adverts aim to act to the intellect of the reader by drawing customers with bargains i.e. Buy one get one free, less than 50% off. Every commercial advert is challenging each other on who is able to sell more products. On the other hand charity adverts aim to persuade the audience to sponsor them, although the individual does not obtain anything directly they still get the satisfaction of helping someone in need. ...read more.

The fact that there is a ring on his finger might suggest he is married. "Why is she only in undergarments? What has happened to her? Who is the man behind her? Could he be her father?" These questions that Barnado's is able to create through visuals in the audiences mind causes the public take interest in this little girl's problem. The words written "abuse through prostitution STEALS CHILDRENS LIVES" gives the public an idea on what may be happening. Prostitution on its own means someone who is willing to sell their body for money. But when prostitution is linked to this picture of a girl only in undergarments with abused associated it seems that she is being forced to do certain distasteful things buy the male figure. The colours used in the visual are very dull this seems to create a gloomy and depressed feeling in the public's mind. Barnado's has used strong visuals and powerful language in this advert these are two very effective methods in persuading the public. The second advert is shows a baby born into poverty. It is a very disturbing image of a baby with a cockroach in its mouth. ...read more.

The reader may think Barnado's is being biased by showing a male figure. In today's society this is not always the case, woman also do such disgusting things, for example just recently a nursery worker admitted of abusing the children she was suppose to look after, she had total disregard to the lives of those victims. http://news.bbc.co.uk/1/hi/england/8284192.stm. Although they are charity they do not ask the public to sponsor directly instead Barnados has used strong language and vile images to aware the public of what is happening in this world. If the public is interested they have listed a website and phone number. Although barnados does not directly ask for money from the public, the audience is emotionally compelled to do so Barnado's tries to bring the best in every child giving them a bright future. Barnado's uses affective methods in their adverts to persuade the public to sponsor them. My personal favourite was the one about baby Greg with the cockroach as it made me feel terrible for what I have and what people in this country take for granted. To imagine such a thing was not even possible until I saw Barnado's advert. I felt sorry for baby Greg and all the other children born into poverty. ?? ?? ?? ?? Neelam Hirani English coursework- Media Draft 1 ...read more.