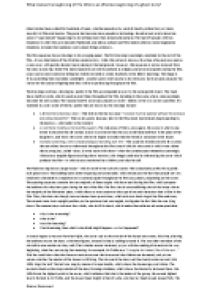 ﻿What makes the beginning of The Others an effective beginning of a ghost story? Ghost stories have existed for hundreds of years, whether passed on by word of mouth, printed text, or (more recently) in films and movies. The genre has become more popular as technology has advanced, and science has proven ?supernatural? happenings to be nothing more than natural phenomena. This has left people with less situations in which they are naturally frightened, and allows authors and film-makers alike to create imaginative situations, to make their audience worry about things unknown... The title sequence shows drawings in ink, on aging paper. The first drawing is seemingly unrelated to the rest of the film ? it is an illustration of the Christian creation story. While this picture is shown, a few lines of Genesis are read as a voice over, with gentle classical music playing in the background. However, this sequence is not as removed from the story as one may think! The main characters are strictly Catholic by religion, and at several points during the film, Grace can be seen insistently telling her children to believe whole-heartedly in the Bible?s teachings. The image is lit by something that resembles candlelight ? another point which seems to be irrelevant, but it actually prepares the viewer for the colour of lighting that they will be experiencing throughout the film. The drawings continue, showing key points in the film, accompanied as ever by the same gentle music. ...read more.

The trio reach the door, and the clearly senior servant (Mrs Mills) rings the bell. The bell was rung by means of a rope handle, which shows the houses age, and status. The servants stand on the steps outside of the door, forming a tableau, which shows the hierarchy between them. Mrs Mills forms the highest point in the scene, which indicates that she is the leader of the group, the second highest level is formed by Mr Tuttle, and the lowest head height is that of Lydia, who has her head bowed respectfully. The columns around the door frame the scene, which makes the characters seem far larger than they are. Even though the background is fairly plain in this scene, it shows a large wooden door ? which shows that the building belongs to a person who can afford luxuries. The house in this scene could also be a metaphor for Grace?s seemingly flawless composure, with something much darker hidden behind the facade... The former secret being ?the intruders?, who are mentioned throughout the film, and the latter being Grace?s murder of her two children, and then suicide. To get back to the scene in question, the tableau is ?framed? by two columns, which allows focal points within the frame to appear larger, as they occupy more of the region of the screen that is in focus. At that moment, the door opens. The sound effect of unlocking the door is amplified greatly, which subtly allows the audience to pick up on the fact that the door is locked. ...read more.

a good example of this, even if the irony becomes repetitive and predictable, after one grasps the general plot of the story). Another stereotype-challenging element is the subtle nature of the fear. Whereas many other films of the horror and ghost genres contain as many loud, violent thrills as possible to pack into the runtime, The Others allows small inconsistencies in logic (for example, after Grace has instructed Mrs Mills to speak to Lydia about running across the upstairs floor, the pair appear outside, where it is impossible that Lydia was creating the footsteps) to confuse the audience, then strike the odd burst of high tension (the piano scene, for example), before building to a climax of utter disorientation (before the end, when it is revealed that Grace and the children are ghosts). It is this confusion that gives The Others a unique, intelligent twist on the typical horror film. All in all, the beginning can prepare us for much of the film, even though we may not notice it on first viewing. However, some links (such as Grace?s scream over her death) are left largely unexplained until the final scenes, which allows for suspense. Other things are not linked to at all, which makes them more of a surprise. This mixture of links which are existent and nonexistent allows for there to be security as to who the characters are, yet allows for tension and climatic effects as well. The linking is perfectly balanced, which makes this a thoroughly unique film, in my opinion, which is why I like it. Name Removed ...read more.