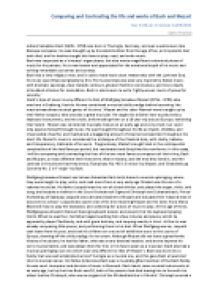 Comparing and Contrasting the life and works of Bach and Mozart

﻿Comparing and Contrasting the life and works of Bach and Mozart Year 11 Music in Context 12/09/2011 Catrin Thomas ________________ Johann Sebastian Bach (1685 - 1750) was born in Thuringia, Germany, and was a well-known late Baroque composer. He was brought up by his eldest brother from the age of ten, as his parents had both died, and his brother taught him how to play, read, and write music. Bach was respected as a ?virtuoso? organ player, but also wrote magnificent orchestral pieces of music for his patrons. He is now known and appreciated for the emotional depth of his music and writing remarkable concertos and sonatas. Bach was a very religious man, and is said to have had a close relationship with the Lutheran God, his music was influenced greatly by this. His musical style was also very inspired by Italian music, with dramatic openings, clear melodic contours, greater rhythmic conciseness, and more clearly articulated schemes for modulation. Bach is also known to write ?tightly woven music of powerful sonority.? Bach?s style of music is very different to that of Wolfgang Amadeus Mozart (1756 - 1791) who was born in Salzburg, Austria. He was considered a musical child prodigy before becoming ?the most extraordinary musical genius of his time?. Mozart and his sister Nannerl were brought up by their father Leopold, who was also a great musician. He taught his children how to play various keyboard instruments, and the violin, before taking them on a 10 year trip around Europe, exhibiting their talent. Mozart was considered musically mature at an early age and very smart, but could only express himself through music. He was thought throughout his life as impish, childlike, and irrepressibly cheerful, and maintained a staggering amount of inspired composition throughout his short life. Mozart?s music is considered the archetype of the Classical style, with clarity, balance, and transparency, hallmarks of his work. ...read more.

Leopold made sure his son always had work, and didn’t get distracted from his career. Bach and Mozart’s careers were very different. Mozart travelled all over Europe at an early age with his father, and again with his mother looking for work. He generally struggled to hold down a job, and turned to writing music and operas on his own. He also taught students. This is very different to Bach stayed within his home country, and did not travel around Europe like Mozart. He always had work usually with patrons as Konzertmeisters, Kapellmeister’s, and court musicians. The two composers also had very different education experiences. Bach was probably home-schooled the basics until he was 15 and took up a chorister-scholarship at The Michaelisschule in Lüneberg. In contrast, Mozart was educated very by his father until the education became better than that of a boys school. There are obviously lots of differences and similarities between the lives of Bach and Mozart. Bach was born at the very end of the Baroque era (1600 - 1750), and his music was therefore very influenced by the characteristics of this era. Some of the characteristics of the Baroque era include a connection between music and other art forms such as architecture, and music that is written specifically to accompany a painting. A change in tonality is also a characteristic of the Baroque era which included diatonic harmonies where major and minor replaces 7 modes, increased chromaticism, and well-tempered tuning. One of the most common known characteristics to come from the Baroque era would be basso continuo, which is a kind of continuous accompaniment notated with a new music notation system, figured bass, usually for a sustaining bass instrument and a keyboard instrument. The melodies and harmonies from this era were very textured and complex, making pieces harder for musicians to play. The form of music written in the Baroque era had also changed. ...read more.

This happens many times throughout the piece, for example in bar 50, page 198. In contrast to the early years of the era, the performers do not really embellish Bach?s melody. There are many trills, in movement 2 in particular, and also an improvised right hand of harpsichord, where the harpsichord got left hand music and the right hand got numbers to improvise with, for example on page 208. The use of semiquavers in both main themes creates the feeling of perpetual motion, and gives a busy sound. The trumpet melody is considered the hardest part out of all the parts written in Bach?s six Brandenburg concertos. It is very high and virtuosic, especially in movement 3, which would need to be played by a very talented trumpet player, as notes of the higher register would use quick-changing lip pressure to change the pitch of the instrument as they had no valves. The melody/ harmony of Mozart?s Symphony No. 40 in G minor involves a very interesting key change, within the 4 movements. Like Bach?s piece, the key changes in the second movement, however, it changes from G minor to E flat major, which is that submediant (the 6th note), not the typical mediant (the 3rd note). The fourth movement contains a remarkable modulating passage, which strongly destabilizes the key, and occurs at the beginning of the development section. Every note of the chromatic scale is played, except a G natural (the key of the piece). The use of counterpoint had changed in Mozart?s symphony from that of Bach?s concerto. Homophony, which is a texture where two or more parts move together on different notes to create chords, is commonly used in this piece. Counterpoint had not completely been taken from the music, but it had stopped being the foundation of a composition. The different melody/harmonies of the movements within both Bach and Mozart?s concerto and symphony are very contrasting to each other and are very good examples of the melodies and harmonies that were typical in the baroque and classical eras. ...read more.