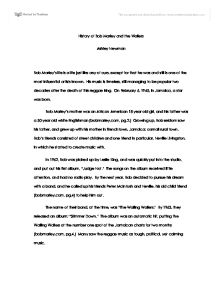 History of Bob Marley and the Wailers Ashley Newman Bob Marley's life is a life just like any of ours, except for that he was and still is one of the most influential artists known. His music is timeless, still managing to be popular two decades after the death of this reggae king. On February 6, 1945, in Jamaica, a star was born. Bob Marley's mother was an African American 18 year old girl, and his father was a 50 year old white Englishman (bobmarley.com, pg.2.) Growing up, Bob seldom saw his father, and grew up with his mother in Trenchtown, Jamaica; a small rural town. Bob's friends consisted of street children and one friend in particular, Neville Livingston, in which he started to create music with. In 1962, Bob was picked up by Leslie King, and was quickly put into the studio, and put out his first album, "Judge Not." The songs on the album received little attention, and had no radio play. By the next year, Bob decided to pursue his dream with a band, and he called up his friends Peter McIntosh and Neville, his old child friend (bobmarley.com, pg.4) ...read more.

In 1971, looking for national success, The Wailers went to Britain (bobmarley.com, pg.5.) Soon enough, they found Chris Blackwell; a British producer who gave them access to the best recording studios, and gave the band 4000 Euros to create an album. The Wailers' first album; "Catch a Fire", was breaking all of the rules of reggae music, and was the start of a huge success. Blackwell soon decided that the Wailers would tour not only in Britain, but also America. In April, 1773, the group started their tour through Britain, in clubs and small venues. As they started to tour in America, they opened for a young Bruce Springsteen, and Sly & the Family Stone. During the tour, they were taken off the bill four times because they were often better than the headlining bands. By late 1773, the band had already put out another album, "Burnin," including versions of "Get Up Stand Up" and "I Shot the Sheriff," which was remade by Eric Clapton (bobmarley.com, pg.5.) Soon enough, Peter McIntosh quit the band, and the band was renamed Bob Marley and The Wailers. ...read more.

He was then asked to go to the United Nations in New York to receive the Medal of Peace. By 1980, the Band had made yet another album, called "Uprising," with popular songs such as "Could you Be Loved" and "Redemption Song." After playing there European tour, with as many as 100,000 fans at one show, they started there American tour (bobmarley.com, pg.7.) Two shows into the tour, Bob Marley fell sick, and it was serious. Three years earlier, he had cut his toe playing soccer, and it had become cancerous. Eventually, the cancer spread through his body, and he fought the disease for over 8 months. At one point, the cancer seemed to stabilize, but it came back once again, leaving him to die at a Miami hospital, on May 11th, 1981, just at the peak of his success (bobmarley.com, pg.7.) On May 21st, 1981, Robert Nesta Marley was given an official funeral by the people of Jamaica (bobmarley.com, pg.7.) He was buried in his home town. Bob Marley may have died at age of 36, but his music and impact on society will never die, making him a true legend. ...read more.