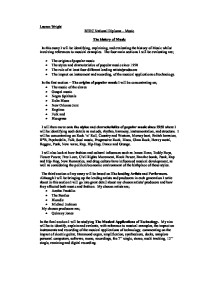 The history of Music

Lauren Wright BTEC National Diploma - Music The history of Music In this essay I will be identifying, explaining, and evaluating the history of Music whilst involving references to musical examples. The four main sections I will be evaluating are; * The origins of popular music * The styles and characteristics of popular music since 1950 * The role of at least four different leading artists/producers * The impact on instrument and recording, of the musical applications of technology. In the first section - The origins of popular music I will be concentrating on; * The music of the slaves * Gospel music * n***o Spirituals * Delta Blues * New Orleans Jazz * Ragtime * Folk and * Bluegrass I will then move onto the styles and characteristics of popular music since 1950 where I will be identifying such details as melody, rhythm, harmony, instrumentation, and structure. I will be concentrating on Rock 'n' Roll, Country and Western, Mersey beat, British Invasion, R*B, Psychedelia, Folk, Soul music, Progressive Rock, Disco, Glam Rock, Heavy metal, Reggae, Punk, New wave, Rap, Hip-Hop, Dance and Grunge. I will also look at how fashion and cultural influences such as James Dean, Teddy Boys, Flower Power, Free Love, Civil Rights Movement, Black Power, Ban the b**b, Punk, Rap and Hip-Hop, New Romantics, and drug culture have influenced musical development, as well as considering the political/economic environment of the birthplace of these styles. The third section of my essay will be based on The leading Artists and Performers. Although I will be bringing up the leading artists and producers in each generation I write about in this section I will go into great detail about my chosen artists/ producers and how they affected both music and fashion. My chosen artists are; * Aretha Franklin * The Beatles * Blondie * Michael Jackson My chosen producers are; * Quincey Jones In the final section I will be studying The Musical Applications of Technology. ...read more.

This music incorporated songs and rhythms from string band, gospel (black and white), work songs and "shouts" of black labourers, country and blues music. Vocal selections included duet, trio and quartet harmony singing in addition to Bill's powerful "high lonesome" solo lead singing. After experimenting with various instrumental combinations, Bill settled on mandolin, banjo, fiddle, guitar and bass as the format for his band. From 1948-1969, Flatt & Scruggs were a major force in introducing bluegrass music to America through national television, at major universities and coliseums, and at schoolhouse appearances in numerous towns. Scruggs wrote and recorded one of bluegrass music's most famous instrumentals, "Foggy Mountain Breakdown," which was used in the soundtrack for the film, Bonnie & Clyde. In 1969 he established an innovative solo career with his three sons as "The Earl Scruggs Revue." Scruggs still records and performs selected dates in groups that usually include his son, Randy on guitar, and his son, Gary on bass. Bluegrass music is now performed and enjoyed around the world. In addition to the classic style born in 1946 that is still performed widely, bluegrass bands today reflect influences from a variety of sources including traditional and fusion jazz, contemporary country music, Celtic music, rock & roll ("new grass" or progressive bluegrass), old-time music and Southern gospel music. Part 2 - Characteristics and styles "Rock 'N Roll" is a musical genre whose 'golden age' is usually recognized as the decades of the 1950's and 1960's. This musical form had its beginnings in the blues tunes, gospel music, and jazz-influenced vocal music that became popular among African-American audiences after World War II. Then came along a new kind of blues, it featured electrically amplified guitars, harmonicas, and drummers that emphasized after beats. By the mid-1950's such performers as Little Richard, Joe Turner, and Chuck Berry were becoming popular with white audiences. Radio disc jockeys began calling their music rock 'n roll. ...read more.

Today, R&B consists of an off beat rhythm often played by a drum machine, a catchy bass line that more or less leads the whole song, being very heavy and high in dynamics, a catchy riff usually played by some sort of synth sound or maybe even a keyboard and rapping on the verses with a catchy female vocals melody sang in the chorus. Some popular R&B artists today include Mary J Blije, R Kelly, Floetry, Brandy, Lauryn Hill and many more. The psychedelic sixties was all about experimenting...the clothes...the lifestyles...the attitudes...and most certainly the music. The sixties changed the way we heard and saw everything in the world. What was it about the psychedelic music of the sixties that was different from what had gone before? And what was it about psychedelic music that changed the music industry for better and as many would suggest for worse. Psychedelic rock music has taken on a nebulous identity since those halcyon days of the Summer of Love, where love was free and LSD was legal. Every single pop artist of the Sixties took a detour into its murky yet somehow alluring depths during the genre's 1966-1968 heyday, even if most of these acts only stuck around at the party for the space of an album or so. The times of 'Psychedelia' (Flower Power and Free Love) brought such artists as Janis Joplin, Jimi Hendrix, Jim Morrison, and The Beatles. Most Music in the Psychedelic period were based around a typical 12 bar blues style structure and were using such instruments as Rhythm Guitar, Lead Guitar, Bass, Drums, and harmonicas. They were led by the strong, catchy guitar solos and repetitive bass lines. The more 'blues style' songs were usually at a very slow tempo giving the effect of emotion and quite often depression. The use of harmonies was usually played by the guitars or use of instrumentation rather than vocally (like The Beatles). At the same time as this major movement in popular music was happening, so was a lot of issues such as r****m and war. ...read more.