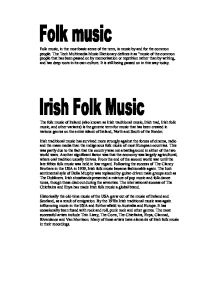 Folk music, in the most basic sense of the term, is music by and for the common people. The Tech Multimedia Music Dictionary defines it as "music of the common people that has been passed on by memorization or repetition rather than by writing, and has deep roots in its own culture. It is still being passed on in this way today. The folk music of Ireland (also known as Irish traditional music, Irish trad, Irish folk music, and other variants) is the generic term for music that has been created in various genres on the entire island of Ireland, North and South of the Border. ...read more.

The international success of The Chieftains and Enya has made Irish folk music a global brand. Historically the old-time music of the USA grew out of the music of Ireland and Scotland, as a result of emigration. By the 1970s Irish traditional music was again influencing music in the USA and further afield to Australia and Europe. It has occasionally been fused with rock and roll, punk rock and other genres. The most successful artists include Thin Lizzy, The Corrs, The Chieftains, Enya, Clannad, Riverdance and Van Morrison. Many of these artists have elements of Irish folk music in their recordings. o Fiddle o Flute and whistle o Uilleann pipes o Harp o Accordion and concertina o Banjo o Guitar o Bouzouki o Mandolin ...read more.

Jazz has, from its early 20th century inception, spawned a variety of subgenres, from New Orleans Dixieland dating from the early 1910s, big band-style swing from the 1930s and 1940s, bebop from the mid-1940s, a variety of Latin-jazz fusions such as Afro-Cuban and Brazilian jazz from the 1950s and 1960s, jazz-rock fusion from the 1970s and later developments such as acid jazz. a guitar with a violin in the back ground and a bell at the start. Another violin is added a tune is played over the guitar Flutes are playerd over the top. In the back ground a drum is being it hit with a wire brush. Violins play over the top until the end with a deffrent tune. ...read more.

This essay is too brief and lack musical detail. Whilst a good list of musical features is listed the writer does not go on to explain what they are and how they are used in folk music.