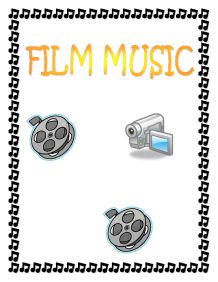 Film Music for COMPOSITIONS AND GENERAL KNOWLEDE AND LISTENING EXAM......:):(:):(:):( Fun fact: John williams is one of the world's famous film music composers of all time) notes:::::::::::::::::::::::::::>>>>>>>> Elements and Devices Syncopated Rythms Cross Rhytms (when rhythms cross each other) ...normally used to create tension Time Signatures: 2 3 4 5 5/4 is rare normally used in horror 4 4 4 4 For compuund signatures multiply by 3 Lietmotif: theme tune for a main character in a film. Ground Bass: Repeated ostinato going through the music Pedal Notes/Drones: A long held single note going throughout the music. Chords is a drone. Imitation: Copy or Canon imitating the music Repetition Sequence Structure ...Also look at vocab for devices that can go with film music e.g polyphonic and structure terms and sequence terms... Notes for the classical era: Wednesday 5th September 2007 The four families that make up a classical orchestra are brass, strings, woodwind and percussion. The family that was the most important in the classical era (1750-1820) was the string group. A symphony is a piece of music for orchestra in movements of contrasting speeds and keys. A concerto differs from a symphony because there is an instrument solo. The violin, piano, clarinet and trumpet are popular soloist instruments in a classical concerto. ...read more.

Passepied Part of a Suite Polychoral More than one choir Polyphonic More than one melody line Polyphony More than one melody line Polytonal More than one key at a time Prelude An opening piece Programmatic Tells a story Recitative A style which is a cross between singing and reciting Rhythm Refers to the beat either in a percussion line, or any other line Ripieno In a concerto: The rest of the orchestra Ritornello Italian for return, used to mean where a section returns Rondo Musical Structure: ABACADA etc. Sacred Religious Sarrabande Spanish: Part of a Suite, in slow triple time Secular Not religious Singspiel An opera in which singing is mixed up with the dialogue Sonata To be sounded (played) A work of several movements, for one or two instruments. Sonata form See 'Classical Music' Strophic Two or more verses set to the same music Subdominant Chord/Note IV Submediant Chord/Note VI Supertonic Chord/Note II Symphony Similar to a sonata, but for an orchestra. Syncopation An off-beat rhythm Tempo Speed Ternary Musical Structure: ABA Texture How 'thick' or 'thin' the music is Through-Composed Different all of the way through Timbre Type of sound given by an instrument Tonic Chord/Note I Tutti Means 'everyone' Look in blue music book to look for more terms ...read more.