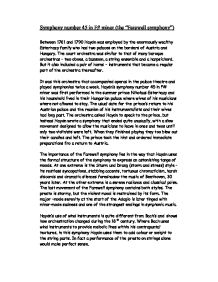 Symphony number 45 in F# minor (the

Symphony number 45 in F# minor (the "Farewell symphony") Between 1761 and 1790 Haydn was employed by the enormously wealthy Esterhazy family who had two palaces on the borders of Austria and Hungary. The court orchestra was similar to that of many baroque orchestras - two oboes, a bassoon, a string ensemble and a harpsichord. But it also included a pair of horns - instruments that became a regular part of the orchestra thereafter. It was this orchestra that accompanied operas in the palace theatre and played symphonies twice a week. Haydn's symphony number 45 in F# minor was first performed in the summer prince Nikolaus Esterhazy and his household lived in their Hungarian palace where wives of his musicians where not allowed to stay. ...read more.

At the other extreme is a serene radiance and classical poise. The last movement of the Farewell symphony contains both styles. The presto is stormy, but the violent mood is restrained by its form. The major -mode serenity at the start of the Adagio is later tinged with minor-mode sadness and one of the strangest endings in symphonic music. Haydn's use of wind instruments is quite different from Bach's and shows how orchestration changed during the 18th century. Where Bach uses wind instruments to provide melodic lines within his contrapuntal textures, in this symphony Haydn uses them to add colour or weight to the string parts. In fact a performance of the presto on strings alone would make perfect sense. The oboes are used in two ways: they reinforce the violins in loud passages and provide sustained notes that bind the texture (eg bars 20-24) ...read more.

It makes the distinction between Bach's contrapuntal orchestral techniques and Haydn's more homophonic approach to the wind section abundantly clear. The division of the violin section into four groups in the Adagio is very unusual. It is allowed Haydn to end the symphony with just two muted violins. Unusually Haydn to gives melodic material to all wind instruments just before they leave. These passages point to the way wind instruments gained their independence from the strings un classical music. Even the double bass is given an extensive solo in bars 55-67. With the departure of the double bass Haydn is left with a four-part string band, then a trio. Meanwhile the first and second violins put their mutes on ready for the consordino duet that fades into silence. Soloist textures of this sort were becoming common in romantic orchestral music, but they are extremely rare in 18th-century symphonies. ...read more.