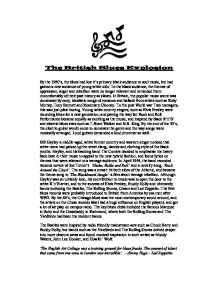 The British Blues Explosion By the 1950's, the blues had lost it's primary black audience to soul music, but had gained a new audience of young white kids. To the black audience, the themes of oppression, anger and rebellion were no longer relevant and reminded them uncomfortably of their past history as slaves. In Britain, the popular music scene was dominated by cosy, idealistic songs of romance and ballads from artists such as Ruby Murray, Tony Bennett and Rosemary Clooney. To the post World war Two teenagers, this was just plain boring. Young white country singers, such as Elvis Presley were recording blues for a new generation, and paving the way for Rock and Roll. Performance became equally as exciting as the music, and inspired by black R'n'B' and electric blues stars such as T-Bone Walker and B.B. King. By the end of the 50's, the electric guitar would come to dominate the genre and the way songs were musically arranged. Loud guitars demanded a loud drummer as well. Bill Hayley a middle-aged, white former country and western singer noticed that white teens had picked up the street slang, dances and clothing style of the black youths. Hayley, and his backing band The Comets decided to emphasise the heavy back beat in their music to appeal to the new hybrid fashion, and focus lyrics on themes that were relevant to a teenage audience. ...read more.

His father was a guitarist and introduced the young John to his extensive jazz and blues collection, of artists such as Lead Belly, Pinetop Smith and Eddie Lang. These influenced him for life. As a young teenager obsessed with music, John began to teach himself to play guitar, the next door neighbour's piano and a borrowed harmonica. Soon he developed his own style, and in a eccentrically artistic twist moved out of his parents house in favour of living in his back yard tree house. He was notorious for being a bit strange and was featured in the local newspapers. His first band was formed in 1955 while he was still in art college, learning commercial graphic design. Calling themselves the Powerhouse Four, they worked locally until Mayall was enlisted for National Service, and was posted to Korea for three years. On returning to England, he moved back into his tree house, this time accompanied by his first wife, Pamela. He had a successful career as a graphic designer, but still maintained his musical interests which came to the surface again when he was in his early thirties. Between 1956 and 1962 John played gigs part time with a reformed Powerhouse Four, and later The Blues Syndicate. His debut album was released in 1965, a live album entitled 'John Mayall plays John Mayall', which was badly recorded but captured the energy and atmosphere of an R'n'B club. ...read more.

Albums recorded during this era were of poor quality and were no longer highly anticipated, instead they were received with apathy. Mayall stopped recording, only played to small audiences in his local vicinity in California. He broke up with his wife and began a relationship with Maggie Parker, a singer/ songwriter who had been hired by Harvey Mandel as John's backing singer. Later the same year, a brush fire destroyed his Laurel canyon home, taking with it all John's personal property, his diaries, artworks, and master recordings. In 1982 he reunited the Bluesbreakers along with Mick Taylor and Mick Fleetwood, for a couple of tours and staged a video concert film called Blues Alive, which featured Albert King, Buddy Guy, Etta James among other big names. A new Bluesbreakers lineup was launched in 1984 with guitarists Coco Montoya and Walter Trout, and drummer Joe Yuele. He toured in Europe once in 1988 where he played to small club audiences who were enthusiastic about his return. He signed to Island records and released 'Chicago Line' then in 1990 'A Sense of Place', which many considered to be his best album in many years. This was followed up in 1993 with 'Wake Up Call' and 1995's 'Spinning Coin'. John Mayall is the only surviving 60's blues catalysts and has outlived all of his contemporaries, and has furthered the growth of blues more than any other English or white man, and has never deviated from his vision. ...read more.