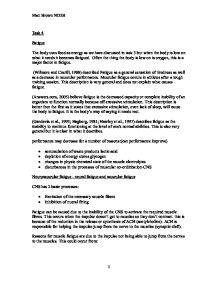 Fatigue - affects on the body

Task 4 Fatigue The body uses food as energy as we have discussed in task 3 but when the body is low on what it needs it becomes fatigued. Often the thing the body is low on is oxygen, this is a major factor in fatigue. (Wilmore and Costill, 1988) described Fatigue as a general sensation of tiredness as well as a decrease in muscular performance. Muscular fatigue occurs in athletes after a tough training session. This description is very general and does not explain what causes fatigue. (Answers.com, 2005) believe fatigue is the decreased capacity or complete inability of an organism to function normally because off excessive stimulation. This description is better then the first as it states that excessive stimulation, even lack of sleep, will cause the body to fatigue. It is the body's way of saying it needs rest. (Gandevia et al., 1995; Hagberg, 1981; Hawley et al., 1997) describes fatigue as the inability to continue functioning at the level of one's normal abilities. This is also very general but it is clear in what it describes. performance may decrease for a number of reasons:(can performance improve) * accumulation of waste products lactic acid * depletion of energy stores glycogen * changes in physio chemical state of the muscle electrolytes * disturbances in the processes of muscular co-ordinbation-CNS Neuromuscular fatigue - neural fatigue and muscular fatigue CNS has 2 basic processes: * Excitation of the necessary muscle fibers * Inhibition of nueral firing Fatigue can be caused due to the inability of the CNS to activate the required muscle fibres. This occurs when the impulse doesn't get to muscles so they don't contract. ...read more.

Oxygen debt and excess post-exercise oxygen consumption (EPOC) (Wilmore and Costill, 1988) states oxygen consumption is a measure of a person's ability to take in and use oxygen. During low intensity exercise with a constant power output, oxygen uptake increases for the first few minutes, until the oxygen demand by the body is met by the oxygen consumption. At the start of exercise the body uses energy through anaerobic systems until the aerobic system kicks in. It kicks in when the body gets used to the new demand put upon it. The body supplies energy without oxygen at first so the body owes the oxygen this is called oxygen deficit. This oxygen that is owed is paid back after exercise when the body recovers. It does this by keeping oxygen consumption higher then it normally would at rest, this is called oxygen debt. Fig.1 this shows a graph of oxygen consumption during exercise (digital humans) The aerobic system is the most efficient system in terms of ATP production at a steady rate. The aerobic system cannot be used immediately in exercise this is because: * It takes time for the cardiovascular system to get oxygen to the muscles * The aerobic system is kick started by the build up of excess ADP in mitochondria * The rate of demand for ATP is simply too great to be met by the aerobic means Oxygen deficit can be calculated as the difference between the amount of oxygen that is required and the amount that is actually consumed. EPOC is the oxygen uptake above resting values used to restore the body to pre exercise state. ...read more.

Training can be done every other day the training program should last 8-12 weeks. Example sessions that will help to train this energy system are: * 150 m intervals with 20 seconds recovery until pace significantly slows. * 300 m repeated eight times with three minutes recovery. By performing this training, the body will be able to withstand higher levels of lactic acid and produce more enzymes that will help in the production of ATP via the lactic acid system. Exercises of over 60 seconds, can overload the lactic acid system. This system adapts by: * Glycogen stores within muscles increased, due to increase in size or number of mitochodria. * Cells learn to use and store more rapidly * Increase in glycotic enzymes * Increase in lactate dehydrogenase aids convertion of pyruvic acid * Buffering capacity of muscle against lactic acid increased * Can work longer before hydrogen inhibits enzyme action Aerobic system This system requires oxygen and most adaptations from exercise occur in this system. There is no lactic acid and can even burn lactic acid as fuel. The main sources of fuels are complex carbohydrates and fats as fuels. When training this system you should Increase duration of the exercise then increase the intensity. This allows both the capacity to use and deliver oxygen to improve. Total work volume should be between 15-60 minutes for both continuous and interval training. Continuous training works best between 30-60 minutes. Interval training a rep may be between 10secs up to 7 minutes Work rest ratio is 2:1 so for 10 minutes work get 5 minutes rest. Training should occur at least every other 6 days and at most every second day. The training program should last between 3-6 weeks. ...read more.