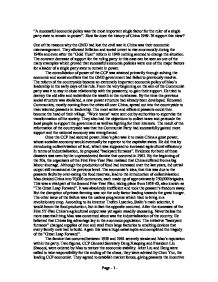 &amp;#147;A successful economic policy was the most important single factor for the ruler of a single party state to remain in power&amp;#148;. How far does the history of China 1949-76 support this view?

"A successful economic policy was the most important single factor for the ruler of a single party state to remain in power". How far does the history of China 1949-76 support this view? One of the reasons why the GMD had lost the civil war in China was their economic mismanagement. They allowed Inflation and social unrest to rise enormously during the 1940s and even after the "Gold Yuan" reform in 1948 nothing seemed to change the situation. The constant decrease of support for the ruling party in this case can be seen as one of the many examples which proved that successful economic policies were one of the major factors for a leader of a single party state to remain in power. The consolidation of power of the CCP was attained primarily through solving the economic and social conflicts that the GMD government had failed to previously resolve. The reform of the countryside became an extremely important economic policy of Mao's leadership in the early days of his rule. From the very beginning on the aim of the Communist party was it to stay in close relationship with the peasantry, to gain their support. He tried to destroy the old elite and redistribute the wealth in the rural areas. ...read more.

After the successes of the First 5Y-Plan China's agricultural output was yet again steadily deceasing. Nevertheless the more essential thing Mao was concerned about was the industrialisation of the country. He believed that Chinas big advantage lay in the enormous population. The initiative "backyard furnaces" changed supplies of iron and steel from large factories to smelting devices that every family now had to build. Again this was a huge catastrophe and completed the tragedy of the "Great Leap Forward". The famine that occurred between 1958 and 1961 severely weakened Mao's reputation within the party. Two figures, CCP General Secretary Deng Xiaoping and President Liu Shaoqoi, were ordered by Mao to restore the economic stability. After Liu and Deng were called to take responsibility for the ending of the chaos, they were advised by Chen Yun, the leading CCP economist. They agreed to establish market forces, giving peasants the incentive to produce more food. This was a typical example of the economic flexibility that the CCP government was willing to use in order to stay in power, but it still proved that the commune system had been a disappointment. Although economic policy did play an important role in the CCP's rule of China, it was not the only aspect that enabled them to stay in power. ...read more.

Young people soon saw him as the great hero who had freed China from a century of humiliation at the hands of foreigner. They were now keen on joining the Red Army to achieve their goal: Revolution. The Red Guard Movement soon became extremely brutalised. They revolted against everything that represented the West, especially the USA, or which was seen as "bad elements". Temples, shrines and other irreplaceable treasures of Chinese civilisation were destroyed by vandalism. Mao simply brainwashed big parts of the population to follow him. Mao's also strengthened his power by making use of the PLA. With the "defenders of Chinas revolution" Mao managed to control the masses and change the direction of the revolution into the way he wanted it to go. A successful economic policy has always been a very important factor for a leader of a single party state to remain in power, but was not the most important. As the example of China in the period 1949-76 perfectly illustrates, the control over the people and the army was far more significant. It could be argued that Mao's consolidation of power was primarily due to solving economic problems which the GMD had left, but he was not able to maintain his leadership without other policies. The loyalty of the Red Army and the successful propaganda towards the Cultural Revolution finally secured him his control of the country. 1,328 words ?? ?? ?? ?? Page - 1 - ...read more.