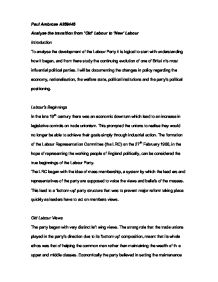 Analyse the transition from 'Old' Labour to 'New' Labour.

Paul Ambrose A259446 Analyse the transition from 'Old' Labour to 'New' Labour Introduction To analyse the development of the Labour Party it is logical to start with understanding how it began, and from there study the continuing evolution of one of Britain's most influential political parties. I will be documenting the changes in policy regarding the economy, nationalisation, the welfare state, political institutions and the party's political positioning. Labour's Beginnings In the late 19th century there was an economic downturn which lead to an increase in legislative controls on trade unionism. This prompted the unions to realise they would no longer be able to achieve their goals simply through industrial action. The formation of the Labour Representation Committee (the LRC) on the 27th February 1900, in the hope of representing the working people of England politically, can be considered the true beginnings of the Labour Party. The LRC began with the idea of mass membership, a system by which the leaders and representatives of the party are supposed to voice the views and beliefs of the masses. This lead to a 'bottom-up' party structure that was to prevent major reform taking place quickly as leaders have to act on members views. Old Labour Views The party began with very distinct left wing views. ...read more.

Finally, the centre of the party argued that socialism should now focus on social inequality rather than nationalisation. These revisionist arguments had been heard before the war in the 30's and were prompted into resurgence by the experiences of the 1945 government. They argued that the character of the British society had changed and that they should now change to accommodate this. Anthony Crossland, the author of The Future Of Socialism, saw it as his mission to transform the Labour party in just such a way. He argued that nationalisation had become confused as a key socialist aim, rather than a method by which socialism could be achieved and that it was no longer relevant. He also believed that there were now commitments that were shared by the parties; full employment and a welfare state, while a consensus existed against laissez-faire economics, no state intervention and poor social provision. His third main argument was that new methods were now needed to achieve socialism. He decided that the method through which to achieve socialism was no longer public ownership but instead now lay with economic growth and social equality. This was the first time that the founding ideas of the labour party were coming into contention and it was being suggested that they move away from their ideology in search of votes. ...read more.

New Labour believes in supply side economics and a much greater role for the market, compared with the government intervention favoured by Old Labour. There has also been a change in economic priorities, moving away from maintaining 'full' employment and instead preferring to focus on low, stable inflation. It's only the position regarding the welfare state that Labour remains on similar ground to its origins, still committed to the NHS and increasing spending. Although, even here it has altered its pledges and instead places more responsibility on the individual (pensions, private health etc.) Conclusion Initially the Labour party set out with far left wing views aimed at voicing the opinions of the trade unions in parliament. It believed in Nationalising key industries, government economic intervention, strong central government and above all representing the common man's views. After the 1945 administration the party chose to move away from their ideologies and go in search of votes instead, a similar decision to that of the conservative party after their crushing post-war defeat. This was the beginning of the transformation from a party designed to represent the unions in parliament into one that searches for votes and power. In some ways the two party's ideals have remained the same, the representation of the common man, only now the maturity of the economy has resulted in the common man no longer working in industry and belonging to the trade unions but now occupying a desk job. ...read more.