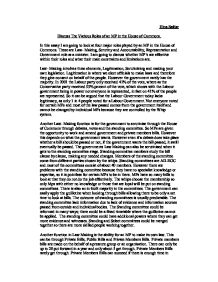 Discuss The Various Roles of an MP in the House of Commons.

Hina Safdar Discuss The Various Roles of an MP in the House of Commons. In this essay I am going to look at four major roles played by an MP in the House of Commons. These are Law- Making, Scrutiny and Accountability, Representation and Government role as a minister. I am going to discuss whether MP's are effective within their roles and what their main constraints and limitations are. Law- Making involves three elements, Legitimation, Scrutinizing and making your own legislation. Legitimation is where we elect officials to make laws and therefore they give consent on behalf of the people. However the government rarely has the majority. In 2001 the Labour party only received 41% of the vote, where as the Conservative party received 33% percent of the vote, which shows with the Labour government being in power not everyone is represented, in fact on 41% of the people are represented. So it can be argued that the Labour Government today lacks legitimacy, as only 1 in 4 people voted for a Labour Government. Not everyone voted for certain MPs and most of the law passed comes from the government itself and cannot be changed by individual MPs because they are controlled by the Whip system. ...read more.

The amount of written questions is unlimited. The questions are effective because supplementary questions are able to test an MPs ability of a minister. It is also a really good way to get information. However the problems include that question times are nothing but a slanging match between MPs. Supplementary questions can usually be anticipated. Ministers don't actually have to answer the questions and anyway it's the civil servants that answer the question not the MPs themselves. Debates in the House of Commons can be done through many ways including, debates on white paper, green paper, ministerial statements, committee amendments, emergency debates and may more. The effectiveness of debates is that it can uncover major issues and publicise problems. It can urge the government to reconsider policy and also helps MPs further their career. However the problem's with debates is that they rarely change anything and is done at night time when most ministers are not present. Voting is another way that an MP can scrutinize the government as all government policy must be legitimised by the House of Commons, so Mps can actually reject government legislation. ...read more.

Mps can ask relevant ministers questions on behalf of the constituents. An Mp can introduce Private Members Bills to change law for a specific constituent. In committee work \MPs can amend legislation inline of what their constituents want. This can happen at all levels including voting, debating, amending, legislating, making legislation and bring the government to account through Prime Ministerial and Ministerial Question Time. MPs have to consider how they help their constituents because when the next general election takes place they will only vote for the MP if last time they were able to help them. Overall I feel that Mps are not very good at their roles in the House of Commons. There is too much work for them to do, so no work can be done effectively. There is never enough resources so work cannot be done effectively. There is too much pressure from the government so constituents cannot be repented fairly. The House of Commons should share its seats out among the party depending on how many people voted for the. For example if 25% of the people voted for Liberal Democrats then the Liberal Democrats should have 25% of the seats. This would mean it is fair and everyone in the UK is represented. ...read more.