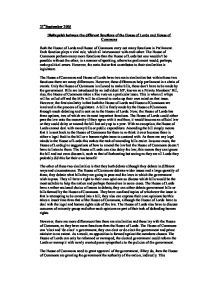 The House of Commons debates wider issues and a large quantity of them; they debate what bills they are going to pass and the laws in which the government wish to pass. They all have a right to their own opinions so discuss which bills would be the most suitable to help the nation and perhaps themselves in some cases. The House of Lords have a rather enclosed choice of issues to debate; they can either debate government bills or bills formed by the House of Commons. They have confined topics of whichever the issue is that is attempting to be created into a bill; they also can express their own opinions but this takes a lesser time than that of the House of Commons, although the House of Lords have to deal with the legal and human rights side of the law. The House of Lords also have to discuss concerns of minority group and other such opinions as part of their task of defending human rights. ...read more.

The House of Commons can also express grievances; individuals can feel that they are dissatisfied by the way they have been treated by a governing body and, in some way, their grievances can be voiced. It is basically an outlet for complaints. The House of Lords have no such process. Lastly, this could apply to both Houses of Parliament, is influence, though this is more prone to the House of Commons. They are subject to any influences via pressure groups, media, public opinions and committees of experts. Many MPs are sponsored by pressure groups and interest groups, trade unions, industrial and commercial concerns; they all have influences, although the influential side to the House of Lords would be that of the people in the same social class as them. So, both Houses of Parliament have important roles to play and each function goes hand-in-hand. Without the House of Commons, debating the countless issues they have and then creating bills from them, the House of Lords would have nothing to debate. Without the House of Lords, all bills wouldn't be checked to a high enough standard and political mistakes would be made within legislature. One simply can't do without the other! ...read more.