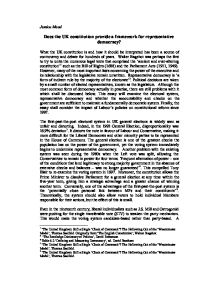 Does the UK constitution provide a framework for representative democracy?

Jessica Mead Does the UK constitution provide a framework for representative democracy? What the UK constitution is and how it should be interpreted has been a source of controversy and debate for hundreds of years. Walter Bagehot was perhaps the first to try to unite the numerous legal texts that comprised the 'ancient and ever-altering constitution'1 such as the Bill of Rights (1688) and the Parliament Acts (1911, 1949). However, many of the most important laws concerning the power of the executive and its relationship with the legislative remain unwritten. Representative democracy is 'a form of indirect rule by the majority of the electorate'2. Political decisions are taken by a small number of elected representatives, known as the legislature. Although the most common form of democracy actually in practise, there are still problems with it which shall be discussed below. This essay will examine the electoral system, representative democracy and whether the accountability and checks on the government are sufficient to maintain a fundamentally democratic system. Finally, the essay shall consider the impact of Labour's policies on constitutional reform since 1997. The first-past-the-post electoral system in UK general elections is widely seen as unfair and distorting. Indeed, in the 1992 General Election, disproportionality was 16.9% deviation3. It distorts the vote in favour of Labour and Conservative, making it more difficult for the Liberal Democrats and other minority parties to be represented in the House of Commons. ...read more.

Britain does not have a written constitution in the same way as France or the U.S.A for example. Thus, the constitution ends up being informal, relying on conventions, customs, traditions and precedents. Foley's view is that these informal constitutional provisions prevent the government exploiting the gaps and ambiguities within the constitution. The majority of the constraints on governmental power are informal and can be internal and external, domestic and supra national. One of the most importance domestic constraints is the House of Commons who have a number of instruments to limit the government's power. The Commons may express a lack of confidence and there have been 27 votes of 'no confidence' between 1945 and 1999. However, the majority did not result in the removal of the executive. Two other methods are debates on legislation and select committees to try to hold ministers to account. The government may curtail the former and the latter cannot force a minister to appear before them, which reduces the elected representative to hold the government to account. Since 1997, MPs have effectively been given more time to question the Prime Minister. This shows that the Labour Party is beginning to address some of the accountability of the executive problems. The Prime Minister must be a member of the House of Commons so that he is answerable to the people's elected representatives. However, the Commons have no formal role in appointing the Prime Minister or the Cabinet. ...read more.