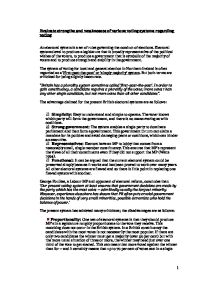 Evaluate strengths and weaknesses of various voting systems regarding voting

Evaluate strengths and weaknesses of various voting systems regarding voting An electoral system is a set of rules governing the conduct of elections. Electoral systems level to produce a legislature that is broadly representative of the political wishes of the voters, to produce a government that is symbolic of the majority of voters and to produce strength and stability in the government. The system of voting for local and general election in Northern Ireland is often regarded as a 'First-past-the-post' or 'simply majority' system. But both terms are criticized for being slightly inaccurate. "Britain has a plurality system sometimes called 'first-past-the-post'. In order to gain constituency, a candidate requires a plurality of the votes; more votes than any other single candidate, but not more votes than all other candidates". The advantage claimed for the present British electoral systems are as follows: Simplicity: Easy to understand and simple to operate. The voter knows which party will form the government, and there is no maneuvering as with coalitions. Strong government: The system enables a single party to dominate parliament and then form a government. This government in turn can claim a mandate for its policies and avoid damaging pacts or coalitions, which can hinder an executive. ...read more.

Over - representation of the Conservative Party: Although the independent Boundary Commission reviews electoral districts every ten to fifteen years to ensure constituencies do not become disproportionate in terms of electors, there is evidence that the electoral map of Britain has produced two nations - a predominantly Conservative South and a Labour North. This has partly resulted from the concentration of Labour votes in the North where votes are wasted in safe seats. Conservative strength in the South is more evenly spread thus producing more southern MP's disproportionately (Rooker 1992). From a party perspective, therefore, Labour is in danger of being associated as the party of the North that cannot win enough southern seats to dislodge a southern based Conservative government. Maintenance of adversarial politics: The present electoral systems help to maintain the artificiality of two party politics resting on an adversarial system. Each major party is encouraged by its electoral prize and stranglehold on power, to present politics in an oppositional form. This in turn is encouraged by the existence of safe seats (approximately 70 per cent), which permanently return Labour or Conservative MPs to the House of Commons. ...read more.

The system is 'closed' because voters are unable to express a preference for a particular candidate. In an Open list system voters are able to vote for individual candidates and the party vote is determined by adding together all the votes cast for the different candidates in that party. Seats are then allocated to a party according to the proportion of votes won by that party. If a party wins one or more seats, candidates are elected according to the number of votes they won. Criticisms of the Closed List system Critics of the closed List system argue that, since the list of candidates are drawn up by party headquarters, voters have no real choice over individual candidates. In addition, the size of constituencies indicates that the link between a representative and the local community are broken. MPs do not individually have a constituency and so there is no sense of local MP's being accountable to their electors. 2. The Single Transferable Vote system This is more of a complex system. Larger constituencies are involved with a number of MP's selected by respective parties. Voters express preference but voters are distributed according to a formula used to calculate the quota. Q = (number of votes cast) +1 (number of seats in constituency +1) To be elected, candidates must pass the quota. ...read more.