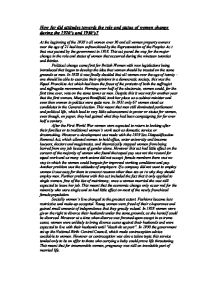 How far did attitudes towards the role and status of women change during the 1920's and 1930's?

How far did attitudes towards the role and status of women change during the 1920's and 1930's? At the beginning of the 1920's all women over 30 and all women property owners over the age of 21 had been enfranchised by the Representation of the Peoples Act that was passed by the government in 1918. This act paved the way for the major change in the role and status of women that occurred during the nineteen twenties and thirties. Political change came first for British Women with new legislations being introduced that began to develop the idea that women should be treated on the same grounds as men. In 1928 it was finally decided that all women over the age of twenty-one should be able to exercise their opinions in a democratic society, this was the Equal Franchise Act which had been the focus of the protests of both the suffragist and suffragette movements. ...read more.

However a development was made with the 1919 Sex Disqualification Removal Act, which allowed women to hold office, enter university and become lawyers, doctors and magistrates, and theoretically stopped women from being barred from any job because of gender alone. However this act had little effect on the careers of the majority of women who found that equal pay was not the reward for equal work and as many work unions did not accept female members there was no way in which the women could bargain for improved working conditions and pay. Another problem was the attitudes of employers. If a company did not want to employ women it was easy for them to concoct reasons other than sex as to why they should employ men. ...read more.

In 1930 the government set up the National Birth-Control Council, which made contraception advice available to women. However as contraception was also a taboo topic this service tended only to be on offer to those who carrying a baby could prove life threatening. This meant that for innumerable women, pregnancy was still an inevitable part of married life. Women may have gained the vote and sat in parliament for the first time, but this does not mean that their roles and status in society changed a great deal. Mens attitudes were slower to change than the laws and so sexism continued. Despite proving themselves as worthy as men during the First World War by 1930 women were still doing much the same as they had been earlier in the century before the outbreak of war. ...read more.