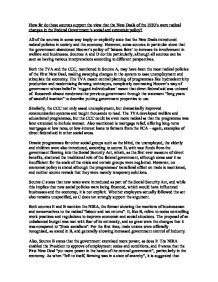 How far do these sources support the view that the New Deals of the 1930's were radical changes in the Federal Government's social and economic policy?

How far do these sources support the view that the New Deals of the 1930's were radical changes in the Federal Government's social and economic policy? All of the sources in some way imply or explicitly state that the New Deals introduced radical policies in society and the economy. However, some sources in particular show that the government abandoned Hoover's policy of 'laissez-faire' to increase its involvement in welfare and businesses. Sources A and D do this particularly, although all sources can be seen as having various interpretations according to different perspectives. Both the TVA and the CCC, mentioned in Source A, may have been the most radical policies of the First New Deal, making sweeping changes in the system to ease unemployment and stimulate the economy. The TVA meant central planning of programmes like hydroelectricity production and modernising farming techniques, completely contrasting Hoover's way of government whose belief in 'rugged individualism' meant that direct federal aid was unheard of. Roosevelt almost condemns the previous government through the statement "long years of wasteful inaction" to describe putting government properties to use. ...read more.

Whether employers actually followed the act also remains unspecified, so C does not strongly support the argument. Both sources E and B mention the NIRA, the former showing the reactions of businessmen and conservatives to the radical "labour and tax returns". It, like B, refers to codes controlling work practices and regulations to improve economic and social situations. The proposal of an unbalanced budget was met with fear of its extremity, and so great were the changes that it was compared to "State socialism". For the first time, trade unions were officially recognised, as stated in B, and generally showing increased government control of industry. Also, Source B states that the government exercised more power, as does F. The NIRA enabled the President to approve of employment codes and conditions, and F states that the First New Deal "put more power in the hands of the central government", particularly in the economy. As when "left to itself, farming was in a state of anarchy", it is suggested that policies interfering with the agricultural system were introduced - for example, the FCA, FSA, TVA and AAA. ...read more.

This may have given reason for embellishment, as with D - which, like A, are from a member of the programme. In both cases, the lack of accurate statistical information suggests uncertainty among other things, and extravagant claims like "never equalled in the history of this nation" with little evidence to back them up causes questioning of factual content. While extracts from actual acts can be held as completely accurate, there may be emotional factors involved in F, as we can see that the speaker only took part in the First New Deal and he may have been biased against the later acts, whether he was expelled or resigned as Brain Trust Head. Source G was drawn from a highly conservative viewpoint and contains high levels of bias, but is useful in informing us about conservative reactions to Roosevelt's policies. Most of the sources can be seen as supporting the view that many radical changes were indeed made during this period, and while they do not mention every change in all social or economic areas, they do tend to show great contrast to Hoover's policies and therefore support the argument. [898 words] ...read more.