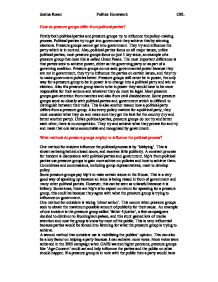 Some pressure groups pay Mp's to raise certain issues in the House. This is a very good way of speaking up because an issue is being raised in from of government and many other political parties. However, this can be seen as unlawful because it is bribery. Sometimes, there are Mp's who expect no return for speaking for a pressure group, this could be because they agree with what the pressure group is trying to influence on government. One method for outsiders is taking 'direct action'. This occurs when pressure groups seek to obtain the maximum possible amount of publicity for their cause. An example of one incident is the pressure group called 'father 4 justice', a few campaigners decided to climb on to Buckingham palace, and this stunt gained lots of media attention and now the group is know by most of the public. This is very influential because parties would be forced into listening for what the pressure group is trying to achieve. A second method that outsiders use is mobilising the publics' opinion. ...read more.

More members of a pressure group then the more popular it is with the public. Size often translates itself into finance and also voting power. If the size of a pressure group is much bigger than another it does not always mean it will have more power, however, in most case the size does matter because popularity in the public is higher. There would be more people to spread the words on certain issues being raised by a pressure group than a smaller pressure group. A third factor is 'celebrity involvement'. Most pressure groups try to gain endorsements from well-known celebrities. An individual who is very famous has more of a chance of getting a point known to the public and the government than one that does not. If an individual for example like David Beckham was to help a group like green peace, then loads of football fans would want to vote with that pressure group. Also having someone famous on your side would raise itself in popularity because media response would be very high. And when the media is at a high the government and political parties find it very hard to ignore, because the public also have their say. ?? ?? ?? ?? Joshua Rosen Politics Homework OEL ...read more.