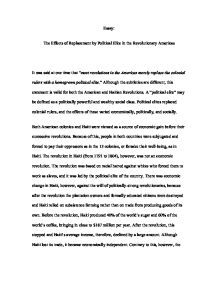 The Effects of Replacement by Political Elite in the Revolutionary Americas.

Essay: The Effects of Replacement by Political Elite in the Revolutionary Americas It was said at one time that "most revolutions in the Americas merely replace the colonial rulers with a homegrown political elite." Although the subtleties are different, this statement is valid for both the American and Haitian Revolutions. A "political elite" may be defined as a politically powerful and wealthy social class. Political elites replaced colonial rulers, and the effects of these varied economically, politically, and socially. Both American colonies and Haiti were viewed as a source of economic gain before their successive revolutions. Because of this, people in both countries were subjugated and forced to pay their oppressors as in the 13 colonies, or forsake their well-being, as in Haiti. The revolution in Haiti (from 1791 to 1804), however, was not an economic revolution. ...read more.

This was because the primary sources of economic profit, people, crop producers, bankers, traders, etc. still existed after the revolution as they did before. Furthermore, the educated and rich people of the country were not removed but took power instead, such as in the Haitian Revolution. Because the American Revolution was opposing tax from the British, after the Revolution in the year 1783 this tax was relieved. There still was, however, tax imposed by the new government. And, because people in the colonies soon rioted against certain taxes, as in the Whiskey Rebellion of 1794, the aim of the political elite in America was somewhat defeated. The colonies also had an economic loss when their trade with Great Britain halted, and when it did resume, American ships were taxed heavily in the ports of their once-oppressing Great Britain. ...read more.

branch of government enabled corrupt leaders like Dessalines to take power and force people back into plantations. Therefore, the revolutions in both countries replaced previous rulers with often-unprepared political elites. In conclusion, the political elite accomplished the fundamental goals of their revolutions, ignoring factors which could have prevented their nations from a few years of civil war and violent, uncontrolled political rivalry. The reinstatement of tax only for the benefit of the political elite in the United States and the forced labor of the Haitian citizens in Haiti because of political elite show the political elite did little to compensate for the economic effects of their revolutions and as a result ended up in almost the same positions as their oppressors. Revolutions, therefore, can be dangerous and many leaders fail to take into account the effects of their political actions and their desire for wealth or power. ...read more.