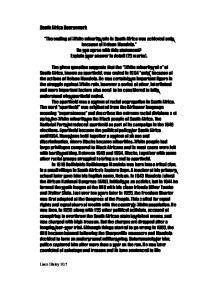 &quot;The ending of White minority rule in South Africa was achieved only because of Nelson Mandela&quot; Do you agree with this statement?

South Africa Coursework "The ending of White minority rule in South Africa was achieved only because of Nelson Mandela." Do you agree with this statement? Explain your answer in detail (25 marks). The given question suggests that the "White minority rule" of South Africa, known as apartheid, was ended in 1994 "only" because of the actions of Nelson Mandela. He was certainly an important figure in the struggle against White rule, however a series of other, interlinked and more important factors also need to be considered to fully understand why apartheid ended. The apartheid was a system of racial segregation in South Africa. The word "apartheid" was originated from the Afrikaner language meaning "separateness" and describes the extreme racial divisions set up by the White minority on the Black people of South Africa. The National Party introduced apartheid as part of its campaign in the 1948 elections. Apartheid became the political policy for South Africa until1994. Many laws held together a system of abuse and discrimination, where Blacks became minorities. White people had large privileges compared to Black Africans and in most cases were left with hardly nothing. Between 1948 and 1994, Blacks, together with some other racial groups struggled to bring an end to apartheid. In 1918 Rolihlahla Dalibhunga Mandela was born into a tribal clan, in a small village in South Africa's Eastern Cape. A teacher at his primary school later gave him his English name, Nelson. ...read more.

They put forward their views and ideas at Lusaka forming the Lusaka manifesto. In 1966 Verw�rd refused entry to some Maoris of which the New Zealand rugby authorities had selected to tour in South Africa. The South African sporting bans drew the attention of the Western countries. Banning an English team to an event as their team consisted of Black players created even more isolation form Europe for South Africa. All these factors including the rise in African Nationalism were together a very powerful political force and it is this, which gives energy to the anti-apartheid movement. Although it is clearly the idea of African Nationalism, which is the most important factor and therefore underpins why apartheid ended. Another important factor to help explain why apartheid ended was the mistakes made by the White government. The rise in African Nationalism put pressure on the White Minority government. A good example of this the Muldergate scandal. In 1973 a serious error of judgement led to Vorster's downfall that shook Afrikaner confidence at the National Party. Vorster approved of a plan set up by Minister of Information, Dr Connie Mulder, for a secret "propaganda war" to boost the image of apartheid not only in South Africa but world-wide. The plan involved using 64 million Rand (�40 million) on bribes, entertainment projects and dirty tricks. This tax -payers money was spent on shares in international news agencies, newspapers, luxury properties in Miami, Cannes, London, Soweto and South Africa. ...read more.

Another figure -head to consider was Desmond Tutu. The part he played in the ending of apartheid was being the respectable face of Black opposition in the world press. He was an Anglican Priest, which was awarded the Noble Peace Prize in 1984. This gave International publicity to another Non -Violent but outspoken critic of apartheid. Again, this all happened whilst Mandela remained in prison. Importantly F.W de Klerk also played a key role in the ending of White minority rule. In 1989 when he replaced P.W Botha as president, few thought he would make many change to life in South Africa. However, on 2 February 1990, de Klerk opened parliament with a 35minute speech, which began to demolish the whole apartheid state. He started by un-banning the ANC, the PAC and the Communist Party and 30 other organisations. He freed political prisoners and suspended the death sentence. Nine days later Nelson Mandela was released without conditions. In conclusion, Nelson Mandela was clearly not the most important reason why the White minority rule ended in South Africa. A series of other interlinked and more important factors have to be considered. For example, mistakes by the White government, the economic pressures and sanctions on South Africa. These are all important to some extent, but clearly the most important factor is the rise in African Nationalism. " From the 1950's onwards the Black peoples of South Africa became more aware of their culture and history..." This underpins all the other factors as the Muldergate scandal and the imposing of sanctions were both reactions to the rise in African Nationalism. Liam Illsley 10.7 ...read more.