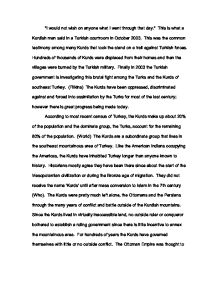 The Kurds make up about blank% of Turkeys population

"I would not wish on anyone what I went through that day." This is what a Kurdish man said in a Turkish courtroom in October 2003. This was the common testimony among many Kurds that took the stand on a trail against Turkish forces. Hundreds of thousands of Kurds were displaced from their homes and then the villages were burned by the Turkish military. Finally in 2003 the Turkish government is investigating this brutal fight among the Turks and the Kurds of southeast Turkey. (Filkins) The Kurds have been oppressed, discriminated against and forced into assimilation by the Turks for most of the last century; however there is great progress being made today. According to most recent census of Turkey, the Kurds make up about 20% of the population and the dominate group, the Turks, account for the remaining 80% of the population. (World) The Kurds are a subordinate group that lives in the southeast mountainous area of Turkey. Like the American Indians occupying the Americas, the Kurds have inhabited Turkey longer than anyone known to history. Historians mostly agree they have been there since about the start of the Mesopotamian civilization or during the Bronze age of migration. They did not receive the name 'Kurds' until after mass conversion to Islam in the 7th century (Who). ...read more.

Others thought at least the Turkish government finally recognized that 'Mountain Turks' are a different group and was grateful they were identified at all. Since the Kurds were never identified before this was a step in the right direction even if some preferred their ancient name. With the help of the government it is very easy for a Kurd to assimilate into the mainstream society in Turkey. Much like the Italians in America, the Kurds look very similar to the dominate group. Also, virtually all Kurds have the same religion as the dominate group, Sunni Muslim. Many have migrated to the western region of the country to live in an urban setting. They are very upwardly mobile once they settle in this area. Since the Kurds are forced to learn the Turkish language, similar to the American Indians, it makes it even easier to assimilate. The biggest challenge, like many European immigrants to America, is the lack of capital once they arrive. The Kurds are very poor and have few assets to get started in the city. "Once they renounce all forms of their culture" they are able to integrate into virtually any part of society as long as they do not identify themselves as a Kurd. ...read more.

This gave to the popular phrase "Turks for Turkey." Also, much like the American Indians, the recent status of the Kurds is comparable. They both are at or near the bottom of the socio-economic spectrum. Although, this maybe attributed to the lifestyle and culture of the Kurds, which does not promote the same goals as the Turks. The Kurdish culture emphasis on a rich tradition of a mountainous life that does not promote materialistic goals. The Kurds are upwardly mobile once they move to the more industrialized west, but since there is little desire among many to do so they will probably remain poor since there is no industry in the Kurdish mountains as of now. Despite the Kurds socio-economic status, the future of the Kurds is brighter than ever mainly because of the European Union. Since Turkey would like to enter the EU they must make long strides to stop all legal discrimination against the Kurds if they want to become a member. Although the Kurds are nearing a pluralistic social system many are still not satisfied. Many Kurds would still like a Kurdish state that would stretch over five countries. However, with much recent progress, there is less of a reason to strive for a Kurdish state in Turkey. For now the Kurds will live as a stateless nation, but at least the conditions are improving for the Kurdish people of Turkey. ...read more.